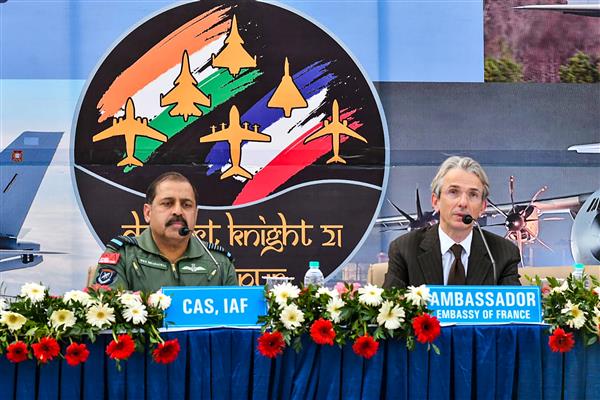 Eight Rafale aircraft have already arrived in India and three more are expected by the end of this month, Air Chief Marshal Rakesh Kumar Singh Bhadauria said here on Saturday.

The IAF chief was speaking at a press conference after the conclusion of ‘Exercise Desert Knight-21’ held in Jodhpur by the air forces of India and France.

He said IAF has initiated a fifth-generation fighter aircraft programme with the Defence Research Development Organisation (DRDO) and plans to incorporate some sixth-generation capabilities in it as well.

“Our present vision is to incorporate all the latest technologies and sensors in our fifth-generation aircraft,” Bhadauria said.

“We started work on fifth-generation aircraft a little late. So technologies and sensors contemporary to that period of development would be added into fifth-generation fighters,” he added.

Bhadauria said when IAF received the Rafale aircraft, the first priority was to operationalise it and integrate it with the existing combat fleet.

“It has already been done, and the current exercise Desert Knight was the result of that,” he said.

“We have some Indian pilots training in France and some in India itself. We have enough pilots to have a right pilot-cockpit ratio,” the Air Chief Marshal said, adding that the entire induction would be completed by next year.

Earlier, Bhadauria congratulated both the air forces for successfully completing the exercise in just four days. Desert Knight-21 was scheduled to be held over five days.

“It is not in terms of interoperability which has been learnt in this exercise, but employment of best practices, operational philosophies and mutual as well as professional interaction,” he said.

Later, talking to the media, French Ambassador to India Emmanuel Lenain said bilateral cooperation between the two countries has been going on ever since the first French aircraft landed in India in 1953.

“Now Rafale is the reflection of this strengthened cooperation and partnership,” Lenain said.

He said this partnership has persisted through good and bad times.

“When India faced difficulties during its atomic test in Pokran in 1998, we were at your side while other countries opposed and objected. And we were also by your side in cooperational manner when you had difficulties with one of your neighbours,” the ambassador said.

He said this exercise would further help in building mutual trust and pave the way for more cooperation. PTI