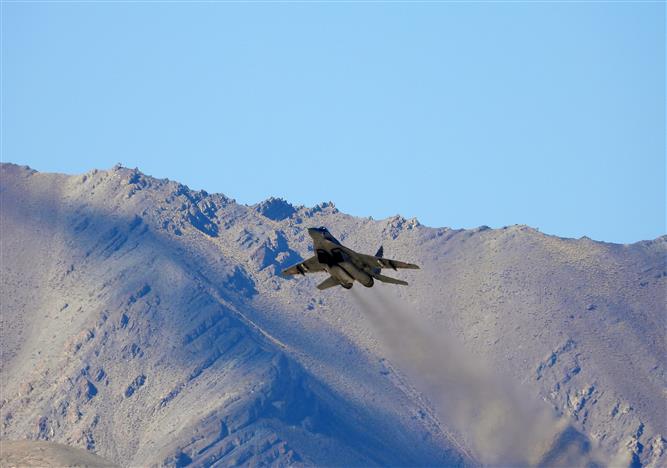 An Indian fighter plane flies over a mountain range in Leh, in the Ladakh region, on September 9, 2020. Reuters

Commanders of the armies of India and China on Wednesday met in eastern Ladakh and also exchanged messages over the hotline on ways to check further escalation in border tension on the eve of a crucial meeting between the foreign ministers of the two countries in Moscow, government sources said.

The sources said the situation in eastern Ladakh remained “tense” and that around 30-40 soldiers of China’s People’s Liberation Army (PLA) are holding up at a position close to an Indian post in the Rezang-La ridgeline in eastern Ladakh.

External Affairs Minister S Jaishankar and his Chinese counterpart Wang Yi are set to hold the keenly anticipated bilateral talks on Thursday against the backdrop of a massive spike in tension in eastern Ladakh triggered by fresh face-offs between the two armies along the Line of Actual Control (LAC).

Jaishankar and Wang are in Moscow to attend a Shanghai Cooperation Organisation (SCO) meeting.

Besides the bilateral talks, the two leaders are expected to come face-to-face during a luncheon meeting of foreign ministers of Russia-India-China (RIC) on Thursday.

The focus of the bilateral talks between Jaishankar and Wang are expected to be on finding a breakthrough in cooling down temperatures in eastern Ladakh, a day after the two countries accused each other of firing in the air at the latest flashpoint in the first instance of bullets being used along the LAC after a gap of 45 years.

The Indian Army on Tuesday said Chinese troops attempted to close in on an Indian position near the southern bank of Pangong lake on the evening of September 7 and fired shots in the air.

The Army said this in a statement after the PLA late on Monday night alleged that Indian troops crossed the LAC and “outrageously fired” warning shots near the Pangong lake.

A meeting between Defence Minister Rajnath Singh and his Chinese counterpart Gen. Wei Fenghe on the margins of another SCO meet in Moscow last Friday apparently did not yield any tangible outcome.

Government sources said a Brigade commander-level interaction took place between Indian and Chinese armies at a forward location along the LAC with an aim to check further escalation of tension and find ways to focus on implementing laid down protocols in management of the border.

Both sides also exchanged messages on the hotline and even commanding officers of the two armies were in touch with each other, they said.

However, the situation in the region remained “tense” with both sides maintaining aggressive posturing following the fresh face-off on Monday evening, the sources said.

The latest incident was considered serious as the previous instance of shots being fired at the de-facto border was in 1975.

Provisions of an agreement of 1996 and another inked in 2005 mandate the two sides not to use firearms during any confrontation.

The sources had said Chinese troops carried rods, spears, clubs and pole weapons called ‘Guandao’ in aggressively trying to close in on an Indian position on Monday evening.

Tensions escalated manifold along the LAC in eastern Ladakh after the Galwan Valley clashes in which 20 Indian Army personnel were killed. The Chinese side also suffered casualties but it is yet to give out the details. According to an American intelligence report, the number of casualties on the Chinese side was 35.

The border situation deteriorated again after China unsuccessfully attempted to occupy Indian territory in the southern bank of Pangong lake on the intervening night of August 29 and 30.

India occupied a number of strategic heights on the southern bank of Pangong lake and strengthened its presence in Finger 2 and Finger 3 areas in the region to thwart any Chinese actions. China has strongly objected to India’s move. However, India has maintained that the heights are on its side of the LAC.

The PLA has been eyeing to capture the strategic heights in the last three-four days, the government sources said, adding the Chinese troops also damaged an iron fence on Monday evening which was put up by Indian troops in the area.

It has also rushed in additional troops and weapons to the sensitive region following China’s transgression attempts. — PTI

At least 19 foreigners have so far been rescued successfully

‘Over promise, under deliver’: Congress’s dig at govt over Union Budget 2023

Jairam Ramesh alleges that this is PM Modi’s strategy of hea...