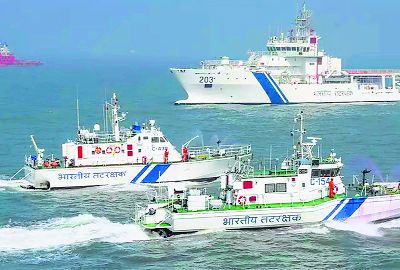 The Indian Coast Guard rescued seven fishermen from a fishing boat which was about to sink near Vanakbara beach in Diu, an official statement said on Tuesday.

The boat had lost its power due to machinery breakdown and was grounded off the beach in the sea, it mentioned.

On receiving the distress call from the Diu administration at 8 pm on Monday, the Indian Coast Guard (ICG) deployed indigenous advanced light helicopter from Porbandar to conduct a lifesaving operation in pitch-dark night and prevailing inclement weather at Vanakbara beach, which is at a distance of 175 km from Porbandar, it noted.

“The aircraft was flown by highly qualified ICG pilots Comdt Kunal Naik and Comdt (JG) Saurabh who displaying exemplary flying skills manoeuvred the aircraft from low-lying clouds so as to reach the area within the timeframe,” the statement said.

The pitch-dark night combined with rough seas at the location compounded the difficulty, however, the highly skilful pilots managed to complete the operation successfully within one hour of the aircraft launch from Porbandar.

All seven crew members were airlifted and rescued by the helicopter to safe ground, it added. PTI