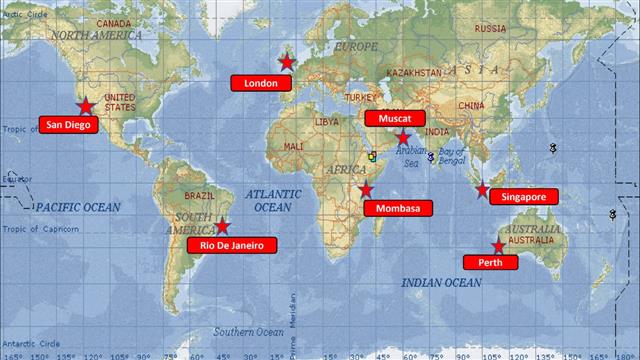 To celebrate 75 years of India’s Independence, commemorative visits are being undertaken by Indian Navy ships to foreign ports in every continent.

Various activities and events are planned at each of these ports by Indian Missions on August 15. The tricolour would be hoisted onboard these ships in the presence of Indian diaspora and distinguished local dignitaries. The event is spread across six continents, three oceans and in six different time zones.

Navy crew would conduct band performances in public places and auditorium and will have the ships open for school children, Indian diaspora and local population.

While INS Chennai and INS Betwa will be in Muscat Oman, ISN Saury will be at Singapore.

In Mombasa, Kenya, the INS Trikand would be visiting; in Perth Australia, the INS Sumedha would be available.

INS Satpura would be at San Diego, North America and INS Tarkash would be at Rio de Janeiro, Brazil in South America. The INS Tarangini will be on duty at London. At London, the crew would pay homage at the Commonwealth memorial gates to the Indian soldiers, who died during the two World Wars.

A ceremonial wreath laying is planned at Kranji War Memorial Singapore. At Kenya, the IN crew will participate in the inauguration of a commemorative pillar in the Battlefield area of Taita Taveta region where Indian soldiers fought and sacrificed their lives whilst serving under East Africa campaign of World War – I.