'Synergy must in maritime domain' 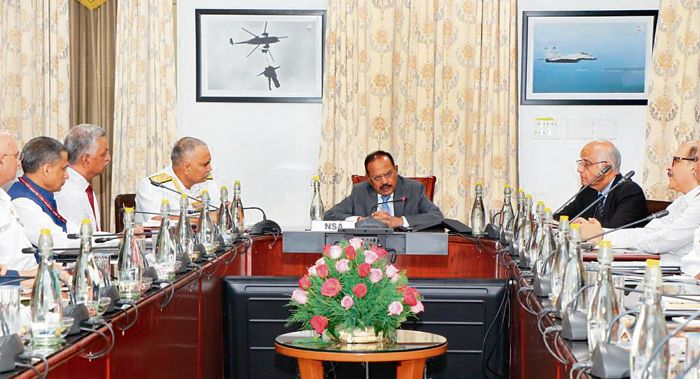 The changing geo-political scenario in the Indian Ocean Region had led to international rivalries, clash of interests and competition and it was important for India to protect its interests, National Security Adviser (NSA) Ajit Doval said today.

Synergy must in maritime domain

Seamless coordination is needed in maritime domain. There’s need to speak same language and have common operational picture that can be actionable. —Ajit Doval, NSA

The NSA was speaking at the inauguration of the first meeting of the Multi-Agency Maritime Security Group (MAMSG), held to discuss policy matters impacting maritime security. The MAMSG is coordinated from the office of the National Maritime Security Coordinator (NMSC) under the NSA. Vice Admiral G Ashok Kumar (retd) assumed charge as the country's first NMSC in February. The group has members from key central ministries, agencies and security forces dealing with maritime affairs and state maritime security coordinators representing all 13 coastal states and UTs.

Doval said economic interests and costal infrastructure were critical to exploit maritime resources. “Investment in technology is needed,” he said, listing drug smuggling and piracy as key threats. Keeping out foreign intelligence agencies was another aspect, he said.

Referring to the 2008 Mumbai terror attack, he listed it as a point that necessitated the need for synergy in maritime domain. He called for seamless coordination saying there was a need to speak the same language and have a common operational picture that could be actionable.

A number of policy issues on maritime security were taken up at the sessions, including a review of standard operating procedures for maritime contingencies, security of ports and coastal infrastructure, creation of a national maritime database, capacity building of coastal states and UTs and promotion of blue economy.

Officials explained the meeting was aimed at bringing about synergy among state and central mechanisms to devise common protocols. Some 95 per cent of Indian trade by volume is on the maritime route through 12 major and over 200 non-major ports.