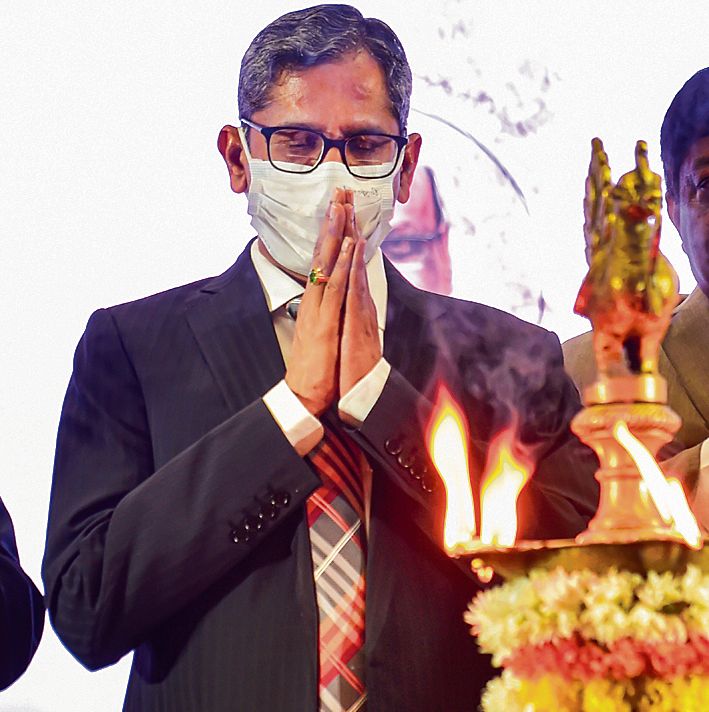 CJI NV Ramana during an event in Bengaluru on Saturday. PTI

Chief Justice of India NV Ramana on Saturday called for “Indianisation” of the legal system to make the justice delivery more accessible and effective.

“The working and the style of courts do not sit well with the complexities of India. Our system, practices and rules being colonial in origin may not be best suited to the needs of Indian population,” the CJI said at a function organised in Bengaluru to pay tributes to late Justice Mohan M Shantanagoudar who died on April 25 at a private hospital in Gurugram.

“The need of the hour is the Indianisation of our legal system. When I say Indianisation, I mean the need to adapt to the practical realities of our society and localise our justice delivery system,” Justice Ramana said.

Noting that these were the topics Justice Shantanagoudar used to discuss with him everyday, the CJI said, “In losing him, the country has lost a common man's judge… I have personally lost the most cherished friend and a valuable colleague.”

Justice Ramana said the simplification of justice delivery should be the pressing concern.

Courts need to be litigant-centric as they are the ultimate beneficiaries. The simplification of justice delivery should be our pressing concern at the moment. —Justice NV Ramana, CJI

Parties from rural areas fighting family disputes were usually made to feel out of place in the court as they didn’t understand arguments or pleadings, mostly in English — a language alien to them, he said, adding that these days judgments have become lengthy, further complicating the position of litigants.

“For parties to understand the implication of the judgment, they are forced to spend more money. Courts need to be litigant-centric as they are the ultimate beneficiaries. The simplification of justice delivery should be our pressing concern. It is crucial to make justice delivery more transparent, accessible and effective,” the CJI said.

“A common man while approaching the court should not feel scared of judges and the courts; he should be able to speak the truth. It is the duty of lawyers and judges to create an environment which is comforting for litigants and other stakeholders,” he said.

“We must not forget that the focal point of any justice system is the litigant,” the CJI said, adding that “use of alternative dispute redressal mechanisms, such as mediation and conciliation, would go a long way in reducing the friction between parties and save resources. It also reduces the pendency and requirement of having lengthy arguments and judgments.”

The Chief Justice of India said the use of alternative dispute redressal mechanisms, such as mediation and conciliation, would go a long way in reducing the friction between parties and saving resources.