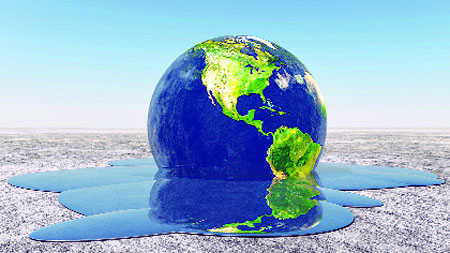 Indians and Bangladeshis have topped the charts when it comes to trust in climate science. File photo

The global public overwhelmingly blames global warming on human activities with trust level declining in climate science, but Indians are the most trusting people in this regard, a new opinion poll showed on Tuesday.

Indians and Bangladeshis have topped the charts when it comes to trust in climate science as also for keeping themselves abreast of news and current affairs, while Russia and Ukraine are among the laggards on both counts.

The global public overwhelmingly blames global warming on human activity, with some regions less trusting of climate science in 2020, according to the survey.

The findings reinforced the urgent need for a collective approach from business, government and civil society to advance societal and environmental agendas, the WEF said.

The survey found that majority of people in the world believed schools were under-preparing students for jobs. Outside of the Americas and South Asia, education is still viewed as a privilege for half of the population or less.

The WEF said the world urgently needed to start implementing policies and strategies that advanced societal and environmental agendas – from re-skilling the population for the future to ensuring strong education and leadership on climate change from all sectors.

The global public-opinion poll, prepared in collaboration with SAP and Qualtrics, surveyed more than 10,500 people in 30 countries accounting for around 76 per cent of the global population.

The findings have been presented in two parts -- Towards a More Sustainable World and Towards a More Cohesive World -- which form the theme of this year’s annual meeting.

Towards a More Sustainable World survey found that while more than half of respondents reportedly trusted climate science, those in India are the most trusting where 86 per cent said they trusted scientists “a great deal” or “a lot”.

India was followed by Bangladesh (78 per cent) and Pakistan (70 per cent). China and Turkey (both 69 per cent) complete the top five.

By region, almost a fifth of North American adults expressed “little” (12 per cent) or “no” (6 per cent) trust in climate science, compared to South Asia, expressing “little” trust (4 per cent), and “no” trust (2 per cent).

Respondents were also asked whether they believed global warming existed and what caused it. Overall, more than two-thirds of people agreed that it is caused mostly by human activity. In Latin America and the Caribbean (78 per cent) agreed.

“We look forward to the Annual Meeting 2020 being a breakthrough moment for climate change. Our participants making a commitment to help tackle this urgent issue is in line with the stakeholder imperative of the 2020 Davos Manifesto and the theme of the 50th World Economic Forum Annual Meeting: Stakeholders for a Cohesive and Sustainable World,” said Klaus Schwab, Founder and Executive Chairman of the World Economic Forum.

Towards a More Cohesive World found that outside of the Americas and South Asia, majorities believed a “good education” is the privilege of half of the population or less.

Respondents also believe local schools are under-performing in terms of training students for the future workforce.

A key focus for the World Economic Forum’s 50th Annual Meeting this week would be driving change to reskill and upskill the global population for future jobs, it said.

Forum research has found education systems have “become increasingly disconnected from the realities and needs of global economies and societies”, with a need to adapt to provide future generations with the right skills.

“Only together can government, business, the scientific community, and NGOs can solve the world’s most pressing challenges – and only if they put a relentless focus on what to achieve and how to achieve it,” said SAP co-chief executive officers, Jennifer Morgan and Christian Klein.

“It’s the people of this world who can help bring this focus to the areas of greatest urgency. Giving them a voice and acting on their feedback is an important duty of every leader from every corner of the globe,” Klein said.

A specific platform focused on up-skilling and re-skilling will be launched at this week’s Annual Meeting. The initiative will create a more cohesive world by providing 1 billion people with new, more relevant skills for accessing decent jobs within the next 10 years. PTI