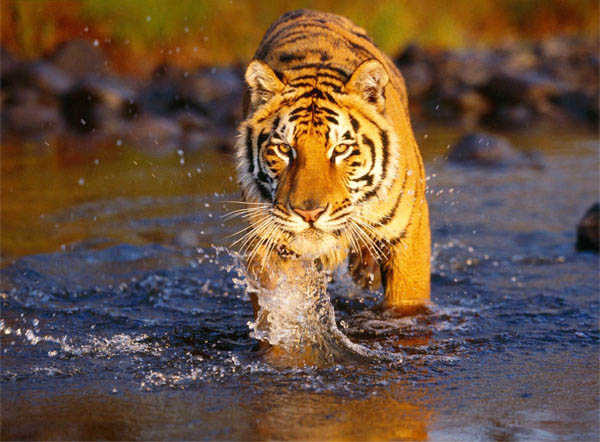 With bad hind-limbs and cloudy eyes, she was too feeble when found abandoned by her mother near a forest temple on the Kerala-Tamil Nadu border last year.

From that frail 60-day-old tiger cub, 'Mangala', fondly being called as by the forest personnel who rescuedand nursed her back to health, is now ready to learn the basics of survival and hunting skills in the sprawling Periyar Tiger Reserve (PTR), located in the Western Ghats.

When the International Tiger Day falls on Thursday (July 29), a group of forest personnel, under the aegis of PTR deputy director Sunil Babu, would begin the 're-wiliding' process of the female tiger cub in the reserve forest, spread over 777 km, tomorrow.

The PTR, currently, has 42 tigers, as per the figures.

The nearly nine-month-old animal, which was reared in these months under the watchful eyes of the forest officials, would be given training to go back to her wild nature as per the protocol of the National Tiger Conservation Authority (NTCA), Babu said.

"Re-wilding is a process to familiarize the animal with the environment of a natural forest. It will learn the hunting and other survival skills as part of the procedure under our observation," he told PTI.

According to the NTCA protocol, thetiger cub should be reared in an in situ enclosure for a minimum of two years.

"Normally, the animal would be released in the original forest after two years of re-wilding. Here, we will decide about its release after observing the nature and health condition of the animal," he said.

Though the tiger cub was too fragile with bad hind-limbs and poor eye sight when it was rescued, the animal is perfectly healthy now, the official added.

As part of the re-wilding process, the baby big cat would be shifted to a 'cage' which is spread in a nearly half-hectares of forest land inside the PTR.

The enclosure would be widened in the later period as per the cub learning the hunting and survival skills.

Fencing would be erectedconsidering the safety of the animal and it would be under strict camera surveillanceof the forest personnel throughout the day and night.

"The core objective of the procedure is to restore the wild nature of the animal which was reared under captivity for some period and make it self-reliant to live in an original forest," he said.

Though the animal would be given some feed like domestic animals such as goat in the initial period, it is expected to learn hunting down prey in the later days.

"To give maximum feel of the original natural forest, the human presence in the enclosure will be made nil in the later months," the official said.

Though it is an expensive procedure, the exact cost is yet to be estimated, he added.

The tiger cub was suspected to have been abandoned by its mother, but officials spotted the tigress lurking around the Mangala Devi shrine in Periyar Tiger Reserve, nearly a week after it was rescued on November 21 last year.

Officials believed the cub was left alone in the wild when the tigress engaged in a fierce internecine combat of tigers in the forest.

Two wildlife doctors had been deployed to save the cub, whichcould hardly stand and if left abandoned, could have died, Department sources said.

All Standard Operating Procedures of the National Tiger Conservation Authority were followed in rescue, they added. — PTI