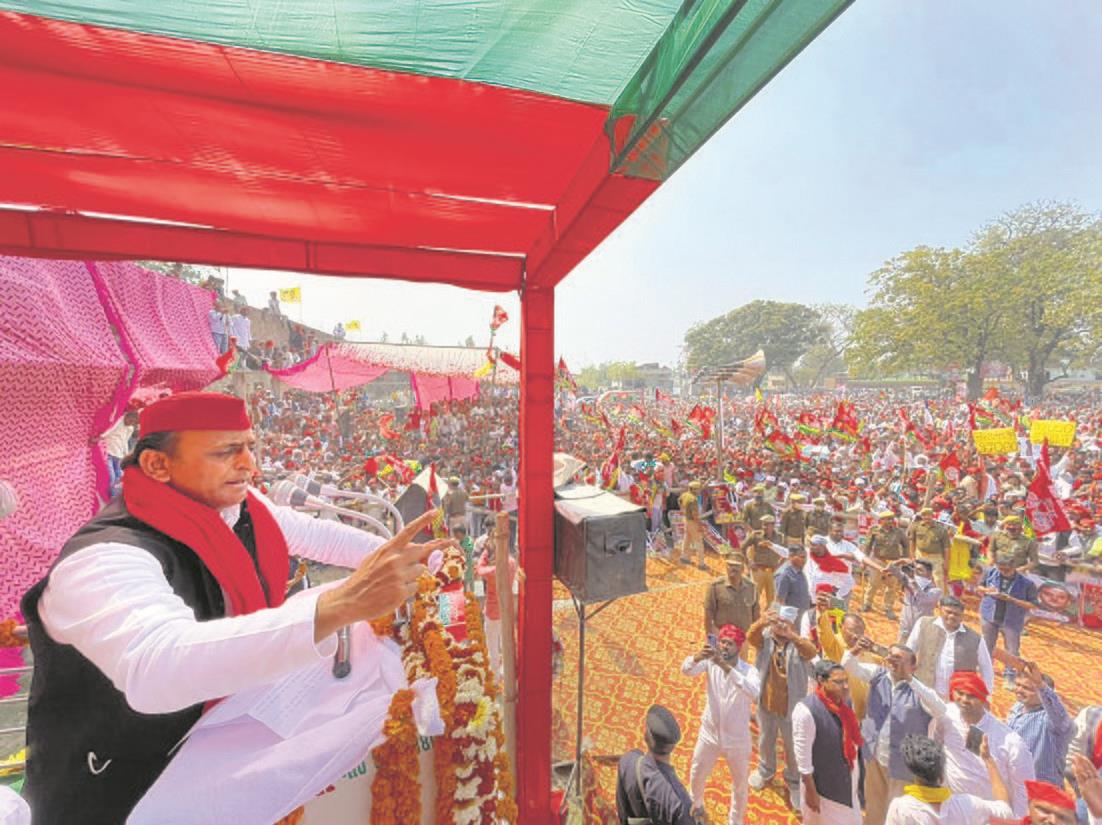 SP president Akhilesh Yadav addresses an election rally for the seventh and last phase of UP poll, in Azamgarh on Saturday. PTI

Campaigning culminated on Saturday for the seventh and last phase poll to Uttar Pradesh. Prime Minister Narendra Modi and Opposition leaders, including Samajwadi Party’s Akhilesh Yadav and Congress’ Priyanka Gandhi Vadra, made their last pitch to woo voters in 54 seats across nine districts.

SP chief Akhilesh Yadav took a swipe at PM Narendra Modi, saying those who were “defaming” the SP’s red cap have been “forced by people” to wear a cap, although of a different colour. PTI

Get your petrol tanks filled before ‘election offer’ ends: Rahul

Quickly get your petrol tanks full. The ‘Election’ offer of the Narendra Modi government is going to end soon. Rahul Gandhi, congress leader

We keep hearing that Uttar Pradesh changes its government every five years. This is not a matter of pride. You need continuity and stability of government. When there is continuity, you become part of the governance structure. Narendra Modi, Prime Minister

Speaking at Khajuri village in Varanasi, PM Modi described these elections as “pro-incumbency”, asserting that “people themselves are fighting for re-election of the BJP government”. Slamming rivals for their “blind and continuous attack” on the BJP, the PM said due to their aversion towards him, “dynasts are making fun of vocal for local and Swachh Bharat Abhiyan. Even on the Ukraine issue, the Opposition is busy playing politics”.

Priyanka, while describing UP as the land of her forefathers, vowed not to desert the state irrespective of the poll result. Accusing rivals, mainly the BJP, of “practising politics of caste and religion and pursuing hollow nationalism”, she said she would continue to fight for people of UP “till the emergence of a true change in its politics”.

Speaking at Ghazipur, Priyanka said, “You (public) are being misled over caste and religion. You will face the maximum loss with the political leaders hardly losing anything. They just want to come back to power and keep you poor.”

In Azamgarh, Akhilesh claimed people would send the BJP “saat samundar paar” in the final phase. “On coming to power, we will ensure early recruitments in the police force as well as in the Army,” he said.

The final phase will seal the fate of several heavyweights, including state minister Neelkanth Tiwari (Varanasi South), SBSP chief Om Prakash Rajbhar (Zahoorabad) and gangster Mukhtar Ansari’s son Abbas Ansari, who is contesting on his father’s traditional seat Mau Sadar in Ghazipur on the SBSP ticket. In 2017, Abbas had contested from Ghosi on the BSP ticket, but lost to BJP’s Fagu Chauhan.

Rajbhar is pitted against BJP’s Kalicharan Rajbhar in Zahoorabad, Ghazipur. In 2017, he had won the seat on the BJP ticket. Neelkanth Tiwari is facing anti-incumbency. He had to issue a public apology for “mistakes committed over the last five years”.