Saibaba's wife asks Maharashtra government to have him released on parole to move him to a private hospital. 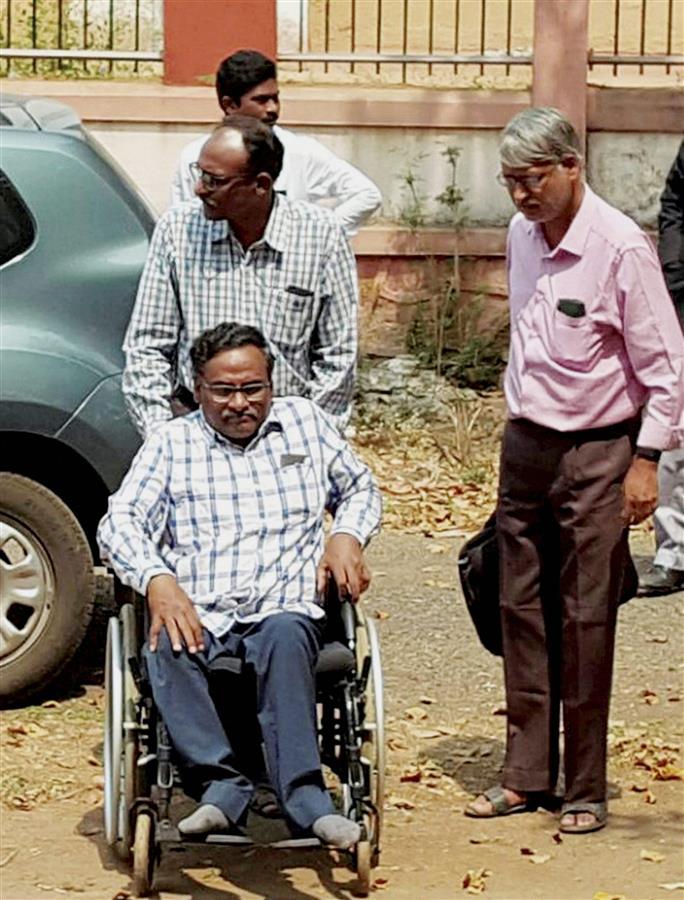 Delhi University professor GN Saibaba who has been sentenced to life by a Gadchiroli sessions court for alleged links with Maoists in Gadchiroli on March 9, 2017. PTI file photo

Along with him, three other inmates of the jail were also found to have contracted the infection, he said.

Saibaba's wife requested the Maharashtra government that he be released on parole and shifted to a private hospital.

"G N Saibaba tested positive for COVID-19 yesterday. He will be taken for a CT scan and other tests, after which doctors will decide whether to shift him to the Government Medical College and Hospital for treatment," jail superintendent Anup Kumre said.

Earlier this week, gangster Arun Gawli and four other inmates of Nagpur jail had tested positive for the infection.

Saibaba is wheelchair-bound with 90 per cent physical disabilities.

In 2017, a court in Maharashtra's Gadchiroli convicted him and four others for Maoist links and indulging in activities amounting to waging war against the country.

Vasantha Kumari, Saibaba's wife, said she has written to Maharashtra Chief Minister Uddhav Thackeray, requesting that he be released on parole and shifted to a private hospital for better treatment.

The Government Medical College Hospital, Nagpur was not equipped to treat such patients and does not have facilities for those who are wheelchair-bound, she claimed.

Saibaba suffers from several co-morbidities including heart and kidney issues that can lead to further complications, she said in a release. --- PTI