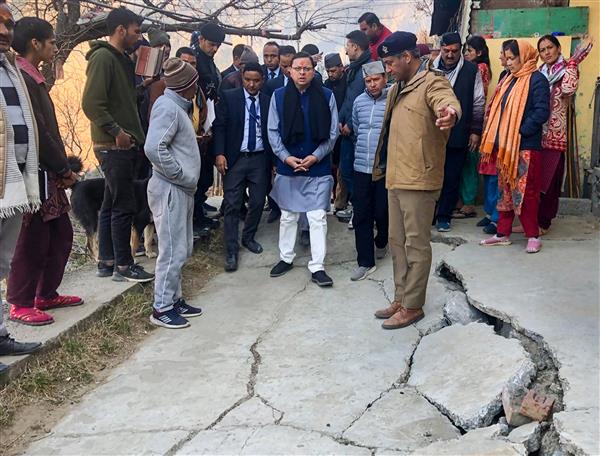 As subsidence situation in Joshimath becomes alarming, a PIL has been filed in the Delhi High Court seeking a direction to the Centre to constitute a panel headed by a retired judge to look into the issue of sinking of the town situated in hills of Uttarakhand’s Chamoli at a height of 6,150 feet.

Considered to be the gateway to Himalayan mountain climbing expeditions, trekking trails and renowned pilgrimage sites such as Badrinath and Hemkund Sahib, Joshimath is reported to be on the brink of subsidence after huge cracks appeared in hundreds of houses, roads and fields, forcing several families to seek shelter elsewhere.

In view of the grim situation, Chief Minister Pushkar Singh Dhami has ordered immediate evacuation of 600 families from there.

Dandriyal alleged that construction activities undertaken by the Ministry of Power, New and Renewable Energy and the Ministry of Road Transport and Highways have worked as a catalyst leading to the present scenario in Joshimath and “violated” the fundamental rights of the residents there.

Highlighting the plight of over 3,000 people of Joshimath, Dandriyal said in his petition cracks have appeared in at least 570 houses due to continued land subsidence.

The petitioner is likely to seek urgent listing of the PIL on Monday.

After sinking of land, apparently caused by climate and infrastructural changes, over 60 families were reported to have left the town while others were either risking their lives by staying there or searching for an alternate accommodation in winter, the petitioner submitted.

“The respondent no.1 (Ministry of Road Transport and Highways) invested Rs 12,000 crore in the programme for connectivity improvement for Char-Dham (Kedarnath, Badrinath, Yamunothri and Gangothri) in Uttarakhand,” the petition said.

The Ministry of Power has invested Rs 2976.5 crore through NTPC and started constructing Tapovan Vishnugad power plant in 2013 for 520 MW Power run-of-river project which is under construction on Dhauliganga River in Chamoli District of Uttarakhand, it stated.

It wanted the court to direct the authorities to constitute a high-power joint committee under the chairmanship of a retired judge of the high court and representatives of all relevant ministries to inspect the affected areas and rehabilitate the affected people.

Since the first reports of the cracks in 2021 after landslides in Chamoli, over 570 houses have sustained damages/cracks as residents repeatedly experienced seismic tremors in the subsequent years, the petitioner submitted.