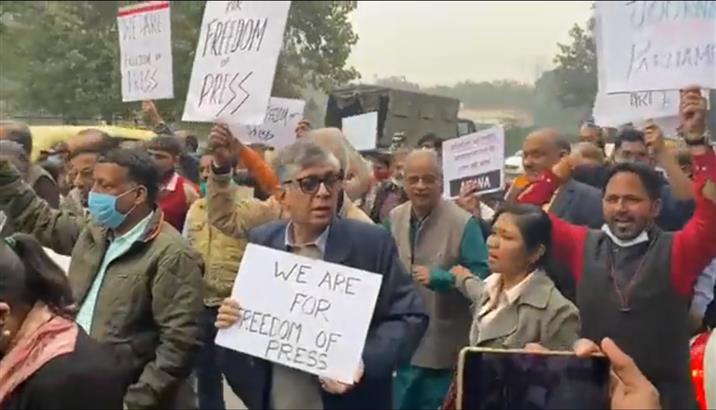 Journalists on Thursday held a protest against certain restrictions imposed on the entry of scribes and camera people into Parliament, alleging the move is a precursor to a “complete ban” on spot coverage of parliamentary sessions by the media in the coming days.

They demanded that all restrictions imposed on journalists’ entry into Parliament premises and the Press Gallery must “immediately” be lifted, and media persons be allowed to perform their professional duty.

A limited number of scribes, photojournalists and camera people working with the print and electronic media are being allowed to enter Parliament premises during sessions since the outbreak of the Covid-19 pandemic last year.

“This (restriction on the entry of media persons into Parliament) was started in the name of Covid in 2020 but now it has gone too far. I think if it is not protested now, it will become a tradition. Media is going to be kept out in the name of Covid,” senior journalist Rajdeep Sardesai said, addressing a protest meet of the journalists organised on the premises of the PCI.

He said that a lottery system being followed at present to issue passes to journalists for entry into Parliament is giving “no access” to the scribes working with smaller newspapers.

“Covid times require certain norms and rules, but it cannot reach a state where journalists are being denied access,” Sardesai added.

Press Association president Jaishankar Gupta said the issue needs to be seen from “a larger perspective” as it is not just about restrictions on the number of journalists entering the Parliament premises during the sessions.

While entry passes are being issued through a lottery system and journalists who have permanent passes being denied entry into Parliament, the process for accreditation of journalists by the Press Information Bureau, required to enter ministries and other departments of the government for the purpose of reporting, has been kept on hold for long by the government, he said.

“They do lottery for issuing Parliament passes in which a journalist’s turn for getting an entry pass comes once in a week. Journalists who have a permanent pass cannot enter Parliament. Entry of journalists to the Central Hall of Parliament has already been banned. The intention behind all these restrictions is to not let journalists access information,” he alleged.

PCI president Umakant Lakhera said that he had raised the issue with the authorities, requesting them to lift all restrictions on the entry of media persons into Parliament but all went in vein. “Democracy cannot function without media,” he said.

“If the government can allow opening of cinema halls, malls, tourism and other things, why is there a restriction on the media’s entry into Parliament? It is not sending out a good message to the world. Pandemic is a concern but issues can be resolved,” IWPC president Vineet Pandey said.

Office-bearers of various organisations of journalists, while addressing a large gathering of media persons, opined in unison that since the media works as a conduit between the people and lawmakers, it is all the more necessary that the process of free flow of news from Parliament be restored.

The protest meet later passed a resolution, appealing to the Union government in general and the Speaker of the Lok Sabha and the Chairman of the Rajya Sabha in particular to ease off the restriction on journalists’ entry into Parliament with immediate effect.

The journalists took out a symbolic march near the PCI and threatened to intensify their protest in the coming days if their demands were not fulfilled.

Later, a joint delegation of journalists’ organisations lead by the PCI president submitted a memorandum to Lok Sabha Speaker Om Birla and Rajya Sabha Chairman M Venkaiah Naidu, urging them to restore the entry of all journalists with permanent passes and sessional passes into Parliament, entry of journalists into the Central Hall and to reconstitute the Press Advisory Committee “at the earliest”.

The delegation also demanded the restoration of the provisions for the long and distinguished category for journalists “as a mark of honour for their long service in the profession”. —PTI