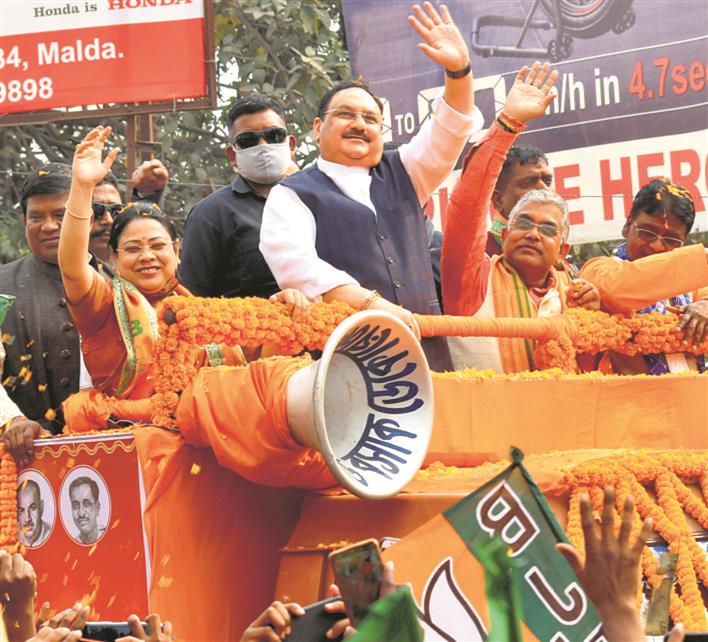 The BJP today attacked West Bengal Chief Minister Mamata Banerjee, saying her “Maa Maati Manush” slogan had been reduced to “dictatorship, extortion and appeasement” and she had delayed the release of direct Central benefits to state’s farmers to satisfy her ego.

Launching the BJP’s “Parivartan Yatra” from Nabadwip, the birthplace of the 15th century saint Chaitanya Mahapraphu, party president JP Nadda said the people of Bengal had decided to send off the TMC, which had “politicised the state administration, criminalised the police and institutionalised corruption.”

Nadda launched the yatra without police permission. The Nadia police said permission was granted only for rally and not the rath yatra as a PIL was pending with the Calcutta High Court against it.

Earlier in Malda, where he had meals with farmers, Nadda questioned Mamata for delaying the implementation of PM Kisan Samman Nidhi scheme, saying, “The CM did so to satisfy her ego and later started the scheme only after she realised she was losing political capital.”

The yatra which Nadda launched comes on the eve of PM Narendra Modi’s second visit to Bengal in 15 days.

The PM was in Bengal on January 23 to mark the 125th birth anniversary of Netaji Subhas Chandra Bose.

“TMC’s Maa, Maati, Maanush vow has been reduced to dictatorship, tolabaazi (extortion) and appeasement of the minorities. The people have lost faith in the state government because only TMC leaders have benefitted in the Mamata regime. They even misappropriated the relief funds meant for the victims of Amphan cyclone,” Nadda alleged, asking why “Jai Shri Ram” slogans repulsed the CM.

“Why does she hate Jai Shri Ram so much? Is it wrong to be in touch with one’s culture? The TMC wants to forsake Indian culture for vote banks,” Nadda said rejecting Mamata’s charge that the BJP was an outsider to Bengal.