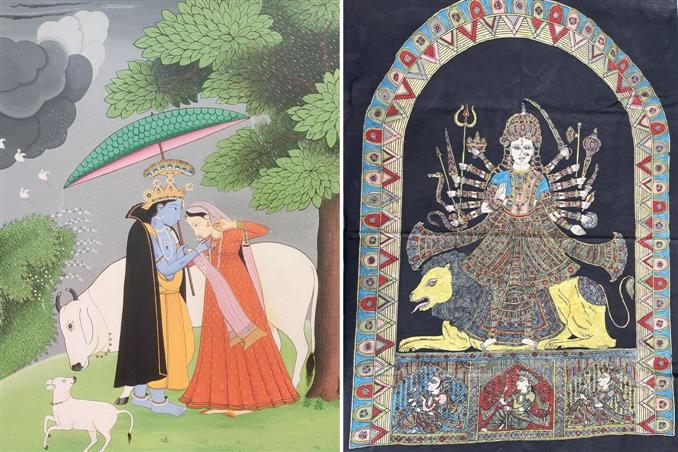 The PM gifted Kangra miniature paintings to US President Joe Biden; Kinnauri shawl to the Indonesian President and a Kanal brass set, an art typical to Mandi and Kullu in Himachal, to Spain.

Kangra miniature paintings generally depict ‘Shringar Rasa’ (love) on a natural, organic backdrop. The art originated in a small hill state ‘Guler’ in the first half of the 18th century when a family of Kashmiri painters trained in the Mughal Style of painting sought shelter at the court of Raja Dalip Singh of Guler.

A PMO statement, describing the paintings said, “The style reached its zenith during the reign of Maharaja Sansar Chand Katoch who was a great patron of Kangra art. These exquisite paintings are made today by master painters from Himachal Pradesh using natural colours.”

To British Prime Minister Rishi Sunak, PM Modi gifted Mata Ni Pachedi from Ahmedabad. The craft is a handmade textile of Gujarat meant to be an offering in temples that house the Mother Goddess. Mata Ni Pachedi was crafted by the nomadic community of Waghris as homage to various incarnations of the Goddess.

Phithora, a ritualistic tribal folk art by the Rathwa artisans from Chhota Udaipur in Gujarat, was presented to Australia.

Phithora is a living testament of an ever-changing ethos exemplifying highly enriched folk and tribal art culture of Gujarat. These paintings are depictions of the cave paintings that tribals used to make reflecting the social, cultural and mythological life and beliefs of those tribals.

The paintings bear a striking resemblance to the aboriginal dot paintings from the indigenous communities of Australia, a reason why the PM selected the gift for Australia.

A PMO statement said Modi presented Patan Patola Dupatta (a scarf) to Italy. The scarf woven by the Salvi family in Patan area of Northern Gujarat is so well crafted that its front and reverse are indistinguishable.

Agate Bowl from Kutch made up PM’s gifts to France, Germany and Singapore. The semi-precious stone formed of chalcedonic-silica, typical to Gujarat, is found in the underground mines of Rajpipla and Ratanpur in riverbeds, and extracted to produce a variety of ornamental objects. This precious craft has been passed down generations of artisans since the Indus Valley civilisation and is currently practised by artisans of Khambat.

The PM presented a silver bowl from Surat to the Indonesian president, along with a Kinnaur shawal.

The Kanal brass set he presented to Spain is a large, straight brass trumpet, over a metre long, played in parts of the Himalayan India.

An art from Mandi and Kullu, it is used on ceremonial occasions, such as the processions of village deities.