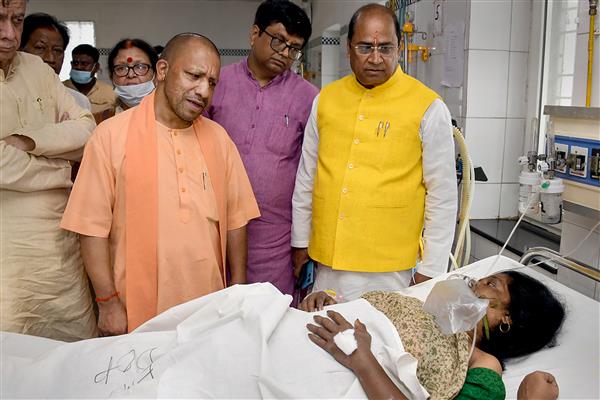 A day after 26 people died in a tractor-trolley accident here, a station house officer was suspended for alleged "dereliction of duty" while the tractor driver was still absconding.

Uttar Pradesh Chief Minister Yogi Adityanath met the injured at the hospital and the bereaved families at Kortha village.

The loss of lives in road accidents is a matter of grave concern and the government would launch more awareness programmes on road safety to prevent such tragedies, he said and again appealed to people not to use tractor-trolly to ferry passengers.

District Magistrate of Kanpur Vishak G on Sunday told PTI, "The SHO of Saadh police station has been suspended for dereliction of duty." A senior police official said that the accident spot was near Bhadeuna village, barely a kilometre from the Saadh police station, but the SHO reached there after around one hour.

"The death toll stands at 26, while the number of injured is nine. There were 35 passengers on the ill-fated tractor-trolley. The post-mortem examination was conducted at night. The cremation is being carried out at Deori Ghat in Maharajpur," the DM said.

According to the eyewitnesses, the tractor was being driven at a high speed despite requests by the passengers to slow down, Additional Director General of Police (Kanpur zone) Bhanu Bhaskar told reporters.

"Subsequently, the driver lost control over the tractor and it overturned. The women and children came under the trolley," he said.

He said that the driver of the tractor is absconding.

"Once he is caught, other things will be probed. Five other people who were with the driver are yet to be traced," he said.

Asked whether the driver was under the influence of alcohol, Bhaskar said that they were looking into it.

The tractor-trolley was on its way to Ghatampur after the passengers attended a "mundan" (tonsuring baby for the first time) ceremony at the Chandrika Devi temple in Fatehpur, the official said.

Wails of grieving families filled the air in Kortha village, to which the victims belonged.

CM Adityanath visited the village, which is 4-5 kilometres from the accident site, and consoled the families of the victims.

"It is tragic incident. The government, in order to stop such accidents, has been running many awareness programmes from time to time. I had appealed yesterday that road safety should be a subject of priority for us.

"A large number of lives are lost in road accidents, and this should be an issue of concern for us," Chief Minister Adityanath said.

"Today, I had called the officials of the transport corporation, and have categorically told them that there is a need to run a comprehensive awareness programme on road safety, and there is a need to connect the schools, colleges and all the stakeholders," he said.

Primarily, tractors, trolleys and trucks should be used for the purposes they are meant to be. If these are not used to ferry people, then we could curtail the loss of lives in a large number, he said.

He also said, "To prevent the loss of lives in road accidents, I have directed the home department, transport, PWD, all the education departments and all the agencies involved in construction to run a comprehensive programme and ascertain the shortcomings which are leading to such accidents." Prime Minister Narendra Modi had expressed grief over the incident and announced an ex-gratia amount of Rs 2 lakh each for the next of kin of the deceased from the Prime Minister's National Relief Fund (PMNRF). The injured would be given Rs 50,000.

Adityanath has sent ministers Rakesh Sachan and Ajit Pal to the accident site to speed up the rescue operation.

An eyewitness told reporters that he, along with others, rushed to the site after hearing the cries of men, women and children for help.

The locals immediately jumped into the water and pulled out the victims, some of whom were already dead, he said.