Part of statewide crackdown on corruption; raids at 60 places across state 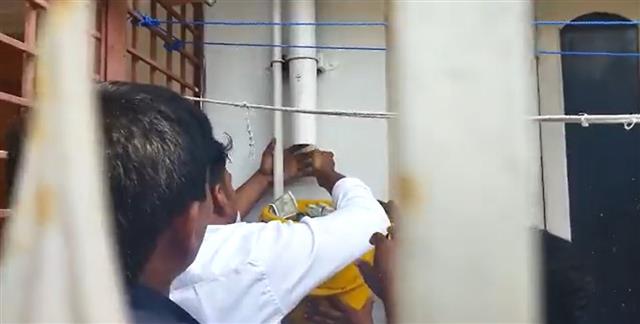 Investigators of the Anti-Corruption Bureau uncovered wads of cash hidden inside the plumbing of the house of an engineer who works with the state Public Works Development, NDTV said in a report on Wednesday.

The raids were part of a statewide crackdown on government officials suspected of corruption. PTI reported that Karnataka’s ACB conducted raids at 60 locations across the state. Some 400 ACB officials raided the premises of 15 officers of various departments, in the state capital, Mangaluru, Mandya, and Ballari.

#Bengaluru: The Anti-Corruption Bureau (ACB) officials conducting simultaneous raids on 68 locations across the state on Wednesday recovered more than Rs 50 lakh cash bundles stashed in a drainage pipe and ceiling of a house. pic.twitter.com/O4qCRNSJ0y

NDTV quoted officials as saying that investigators found Rs 25 lakh in cash and a large quantity of gold at the house of PWD joint engineer Shantha Gowda Biradar in Kalburgi district. Investigator had reports that the official had hidden money in his plumbing and had a plumber pull the cash out, the reports said.

IANS reported that the ACB found over Rs 50 lakh in cash hidden inside the plumbing and from the ceiling of the house.

Visuals recorded during the raid show officials and the plumber removing sections of pipes to get out wads of banknotes hidden inside, NDTV. The report said these pipes were installed specifically to hide unaccounted cash, the NDTV report said.

"Today the ACB conducted a search in 60 places with respect to disproportionate of assets cases registered against 15 officers by a team of 8 superintendents of police, 100 officers and 300 staff," the ACB said in a statement.

ACB sources told PTI they seized property-related documents, a huge quantity of gold and silver ornaments, cash and investment documents from them.

The ACB had recently raided the Bangalore Development Authority officials recently in connection with the alleged irregularities in the allotment of plots in a few layouts developed by BDA, PTI reported on Wednesday.

— With inputs from agencies