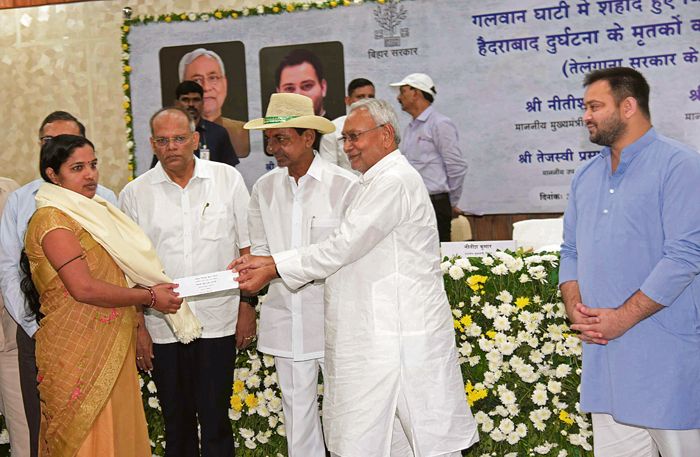 In a major political development in the run-up to 2024 Lok Sabha elections, Telangana Chief Minister K Chandrashekher Rao (KCR) today arrived in Patna where he attended a public event with JD-U supremo and Bihar Chief Minister Nitish Kumar and his deputy, Tejashwi Yadav of the RJD.

Later, addressing a media conference flanked by Kumar and Yadav, KCR slammed Prime Minister Narendra Modi for “ruining the country’s economy and harmony and giving its people nothing more than slogans in the past eight years” and called for a “BJP-mukt Bharat”.

“What we need now is BJP-mukt Bharat (BJP-free India),” said Rao, who has been trying to formulate a non-Congress, non-BJP front for several years. A bitter critic of PM Modi, KCR called his Gujarat model a “complete failure” and showered praises on Nitish Kumar.

“(Narendra Modi’s) Gujarat model is a 100 per cent flop model. There is no doubt about that,” the Telangana CM said.

However, KCR refused to answer repeated questions on if Kumar can be the prime ministerial candidate of anti-BJP parties against PM Modi in 2024 amid similar attempts (to cobble up a third front) in the past.

“Everyone knows the past. ‘BJP se khatra hai or us khetra se desh ko bachane ke liye sab sambhav prayas hum karenge’ (there is danger from the BJP and all attempts will be made to save the country from that danger. Nitish Kumar is a senior leader in the country. We will try to unite all Opposition parties. We will hold consultations and let you know,” he said.

In reference to the “attempt” to make a “third front” and whether the Congress will be its part, KCR shot back saying: “It is not a third front...why are you naming it third front? It is a main front.”

Addressing the event, Kumar lashed out at the Modi government and criticised its excessive ‘prachaar-prasaar’ (publicity) and “lack of sensitivity towards the needs of the states.”

But BJP’s Sushil Kumar Modi called it a “get-together of two daydreamers”.