According to forest officials, no one would have fed the firecrackers-filled pineapple to the elephant 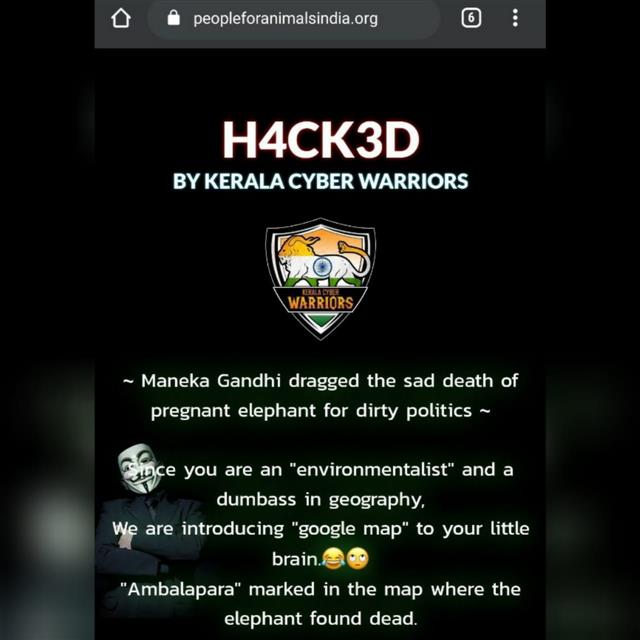 The official website of People for Animals (PFA), an animal rights NGO founded by BJP MP Maneka Gandhi, was hacked on Friday by a Facebook group called ‘Kerala Cyber Warriors’, which has called it an “operation against communal hatred”.

Now, the website displays a long message by the hackers, along with a Google map of Ambalappara in Palakkad district, where a pregnant elephant had died.

“Maneka Gandhi dragged the sad death of the pregnant elephant for dirty politics. Since you are an environmentalist and a ******* in geography. We are introducing Google Maps to your little brain,” reads the message on the website.

Amid the furore over the tragic death of the pregnant elephant in Kerala, a major political blame game ensued after senior BJP leader and animal rights activist Maneka Gandhi called Malappuram, a district with a majority of Muslims, “India’s most violent district”.

The BJP was accused of “communalising” and "using" the heartbreaking incident, the genesis of which, many says, is essentially man-animal conflict, for "political gains".

Also, according to forest officials, no one would have fed the firecrackers-filled pineapple to the elephant.

It must have found it lying somewhere.

"Pineapples and other fruits filled with firecrackers are used as a snare to catch wild boars that destroy crops. It is cruel, wrong and illegal, but such incidents do happen at places where wild animals create problems for farmers. The legal way to get rid of wild boars is long and tortuous,” they said.

Incidentally, Environment Minister Prakash Javadekar, who said killers will not be spared, named Kerala several times to assert it is “not an Indian culture to feed firecrackers and kill”.

Maneka Gandhi’s statement was also used by BJP leaders to target the Pinarayi Vijayan government in the state where the party is trying to make inroads.

“It is not an incident. It is a murder. A pregnant elephant was fed a pineapple filled with a bomb that exploded its mouth. Malappuram is very famous for incidents like this. It is the most violent district in the whole of India. For instance, they throw poison on roads so that 300-400 birds and dogs die at one time. Kerala Government has not taken any action in Malappuram,” Maneka Gandhi said on Thursday.

According to the officials, “the issue is too complex and layered. ‘Gundu’, a firecracker used during celebrations, is often inserted in fruits to scare wild animals. There is also no evidence to suggest that the elephant was intentionally fed the explosive. Traps are laid to snare the wild boars/pigs not only in Kerala but also Karnataka.

"Farmers use the illegal way to get rid of wild animals because the legal way is long and tortuous,” they said.

Originally belonging to Silent Valley National Park (SVNP) in Palakkad, the elephant died at Velliyar River with its trunk in the water.

Due to the explosion, it received severe injuries to upper and lower jaws and the area filled with maggots. Because of the injuries the elephant could not eat or drink anything for weeks, as per reports.