Those who can't discharge duties will have to make way for others: Kharge talks tough at key Congress meet : The Tribune India

Those who can't discharge duties will have to make way for others: Kharge talks tough at key Congress meet

‘Some leaders are fulfilling their duties but some feel their inertia will be condoned, this is unacceptable’ 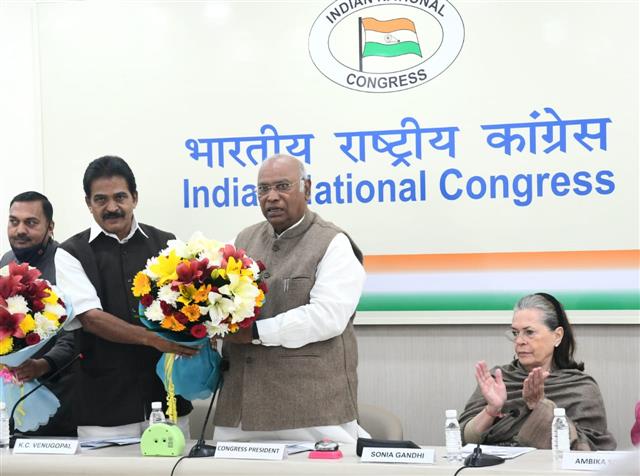 Congress president Mallikarjun Kharge on Sunday talked tough on issues of organisational accountability and said incompetence is not acceptable.

“There are some leaders in the party who are fulfilling their duties but there are others who have decided that their inertia will be condoned. This is neither fair nor acceptable. People who are unable to fulfil responsibilities will have to make way for others,” said Kharge, chairing the party steering committee meeting for the first time since he took charge as Congress president.

The committee consists of all former Congress Working Committee members who had resigned for the new Congress chief to build his own team.

In his opening remarks at the meeting attended by former party chiefs Sonia Gandhi, Rahul Gandhi and all senior leaders, Kharge spoke of the need to fix organisational accountability.

“I believe that organisational accountability from top to bottom is a very important component of Congress Party’s responsibility towards the nation and its people. We will be able to win elections and people’s trust only if we have a strong organisation which is accountable,” said Kharge asking leaders to introspect whether AICC general secretaries and state in-charges are spending at least ten days in the states under their charge.

“Have they discussed problems of their areas with Congress leaders in districts and blocks, have organisational structures been put into place? Is the party organisation articulating the voice of the people? Have they ensured new leadership in their areas? Have any campaigns and protest meetings been organised at state, district and block level on challenges of the day as per AICC directions?” Kharge asked all general secretaries urging them to prepare a plan for their states for the next one to three months and discuss it with him on priority.

Kharge said the responsibility of leaders will not be complete until they prepare state-level plans and implement them right to the grassroots level.

Meanwhile, the steering committee has decided to hold AICC Plenary Session at Raipur in February, likely during the Budget Session break.

The steering committee meeting will discuss the way forward for the Congress.

A call may also be taken on the issue of holding CWC elections.

The CWC is a 25-member body with two permanent members (Congress chief and parliamentary party chief), 12 elected and 11 nominated members.

The Congress has been on an election losing spree for over two years now, and is reduced to power on its own in just Rajasthan and Chhattisgarh which go to polls in late 2023.