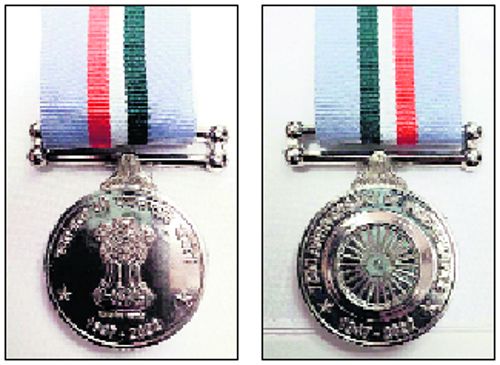 The Centre, on the eve of Independence Day, announced gallantry awards for 143 personnel of the armed forces.

The Centre, on the eve of Independence Day, announced gallantry awards for 143 personnel of the armed forces. The awards include a lone Kirti Chakra, the second highest peacetime gallantry honour, and nine Shaurya Chakras, including two posthumous.

The Government of India has instituted 75th Independence Anniversary Medal through a presidential notification for all armed forces personnel. ANI

Two IAF pilots who flew dangerous missions to Afghanistan have also been awarded while the list also includes ‘Mention-in-Despatches’ for Operation Snow Leopard in eastern Ladakh along the Line of Actual Control. Naik Devendra Pratap Singh has been awarded the Kirti Chakra for neutralising terrorists in a village in Pulwama district of J&K in January this year. “During search, when subjected to indiscriminate fire by four terrorists equipped with modern assault rifles, Naik Devendra Pratap Singh stood his ground undeterred and immediately retaliated,” his citation read. All nine Shaurya Chakras are for counterterrorism operations in the Kashmir valley. The awardees include Maj Nitin Dhaania, 2 Para; Major Amit Dahiya, 1 Para; Maj Sandeep Kumar, Grenadiers; Major Abhishek Singh, Mechanised Infantry; Havildar Ghanshyam, Grenadiers; Lance Naik Raghvendra Singh, Mechanised Infantry, Sepoy Karnveer Singh (posthumous), Rajput Regiment; and Gunner Jasbir Singh (posthumous), Artillery. One of the awardees is Lt Cdr Mrityunjay Kumar from the MARCOS, a marine commando unit, on attachment with the Army Special Forces. Another soldier from the Navy has been awarded the Nao Sena medal for gallantry for operations in the Valley

Notably, two IAF personnel have been awarded the Vayu Sena Medal for ground operations in the Kashmir valley. Both are from the IAF commando unit called Garud. The integration of Naval and IAF commando units with the Army Special Forces is one of the points of integration and joint operations of the forces as mandated by former Chief of Defence Staff General Bipin Rawat.

Meanwhile, two IAF pilots have been awarded the Vayu Sena Medal for flying missions into the war-torn Afghanistan to evacuate Indians after the US-led forces exited that country in August last year.