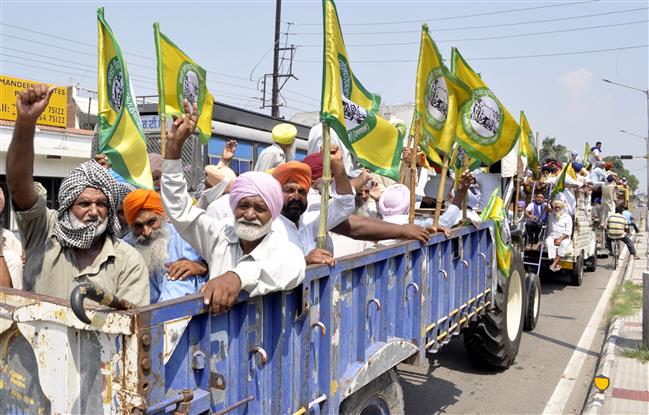 Members of various farmer organisations on way to join a protest, in Patiala, on Thursday. Tribune photo: Rajesh Sachar

The All India Kisan Sangharsh Coordination Committee (AIKSCC) has given a call for a nationwide bandh on September 25 in protest against three agriculture Ordinances brought by the Central government.

AIKSCC has decided to “forcefully go ahead with its opposition to the three Agriculture Ordinances brought by the Central Government and new bills based on these or under consideration of the Parliament”.

“AIKSCC will launch a massive resistance against these new Acts on September 25 with a call for an all-India bandh and resistance protests by farmers as well as observe this year’s 114th birth anniversary of Shaheed-e-Azam Bhagat Singh on September 28 to highlight the pro-corporate, anti-farmer acts of the Central government – the three Ordinances, the New Power Bill 2020 and the steep hike in Diesel and Petrol prices,” according to a statement.

“These 3 Bills/Acts will completely stop government procurement of crops, bringing to a grinding halt the price security for peasants as private mandis shall be set up and price and trade regulation of all cereals, all pulses, all oilseeds, onion and potato shall be removed from coverage under essential commodities,” it said.

According to the farmers’ organisation, BJP president JP Nadda’s assurance that MSP will continue “is a blatant lie as Shanta Kumar committee appointed by this BJP government declared that only 6% farmers enjoy benefit of MSP, that it should be wound up, that FCI and NAFED procurement should stop and that food grain supply under PDS should stop”.

World over, in all countries, barring none, price security for farmers’ produce is always provided for by government, not by companies, which only buy cheap to sell dear and earn huge profits, it said. “Crop once produced has to be sold, otherwise it will perish and lose value.”