Prasad’s younger son and RJD heir apparent Tejashwi Prasad Yadav, who has returned as the deputy CM after five years, rushed to the bungalow’s gate to receive his boss 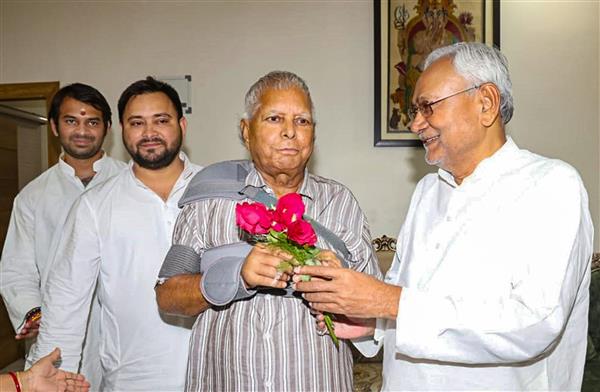 Bihar Chief Minister Nitish Kumar on Wednesday called on his old associate and RJD president Lalu Prasad, with whom his rivalry has been the stuff of political legend and whose party helped him dump the BJP to form a new government.

Prasad’s younger son and RJD heir apparent Tejashwi Prasad Yadav, who has returned as the deputy CM after five years, rushed to the bungalow’s gate to receive his boss.

Kumar warmly greeted Prasad, whom he often calls his “bade bhai” (elder brother), presenting the RJD president with a bundle of flowers which the former CM accepted with one arm bandaged because of a shoulder fracture he suffered last month.

Notably, Kumar, the de facto leader of the JD(U), was last seen at 10, Circular Road earlier this year when he attended an Iftaar feast, an event which was seen as a proverbial straw in the wind.

The chief minister had also visited a private hospital in the city where Prasad had been admitted following the fracture and from where he was taken to Delhi in an air ambulance.

The ailing septuagenarian, who awaits a kidney transplant abroad, came to the city in the evening accompanied by eldest daughter and Rajya Sabha MP Misa Bharti at whose Delhi residence he had been recuperating after undergoing treatment at AIIMS.

Old age and illness obviously seem to have taken a toll on the former Bihar chief minister and ex-Union minister with a legendary sense of humour.

While departing from Delhi, he testily denied before journalists allegations of an arrest warrant pending against Kartikey Singh, an RJD MLC who on Tuesday became a minister.

Upon landing in Patna, he was brought out of the airport in a wheelchair and the charismatic leader, clad in a T-shirt and track pants, responded with a nod and a feeble wave to roars of “Lalu Yadav zindabad” by supporters who had gathered in large numbers.