Lalu Prasad gets bail in fodder scam case, but to remain in jail

The case involves fraudulent withdrawals amounting to Rs 33.67 crore from the Chaibasa treasury in undivided Bihar, when Lalu Prasad was the chief minister 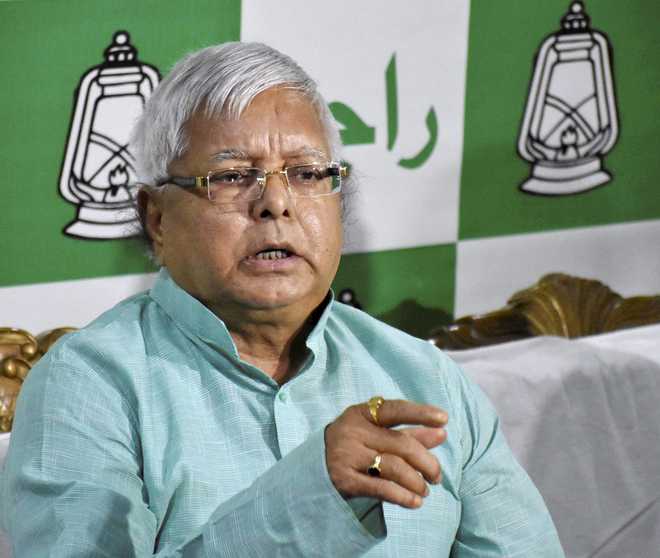 The Jharkhand High Court on Friday granted bail to RJD chief Lalu Prasad in a fodder scam case related to Chaibasa treasury, observing that he has served half of the five-year sentence awarded to him.

The case pertains to fraudulent withdrawal amounting to Rs 33.67 crore from the Chaibasa treasury in undivided Bihar, when Prasad was the chief minister.

The veteran leader, however, will have to remain in jail as he is serving time in another case related to Dumka treasury, which involves embezzlement of around Rs 3.13 crore.

Justice Aparesh Kumar Singh asked the RJD boss to submit two personal bonds of Rs 50,000 each and deposit a penalty of Rs 2 lakh to secure bail.

The court also sought Prasad’s medical report from authorities of Rajendra Institute of Medical Sciences in Ranchi, where he is undergoing treatment for various ailments, and details of everyone he has met since his admission to the state-run hospital.

Senior lawyer Kapil Sibal, along with advocate Devarshi Mandal, pleaded that the 72-year-old leader be granted bail as he has completed serving half the jail term handed to him in the Chaibasa case.

Earlier, Prasad was granted bail in Deoghar treasury case, pertaining to fraudulent withdrawal of around Rs 89 lakh. He is currently facing trial in Doranda treasury case.

The scam, which had come to light in 1992, involved embezzlement of Rs 950 crore from the state exchequer for the purchase of fictitious medicines and fodder for cattle. PTI