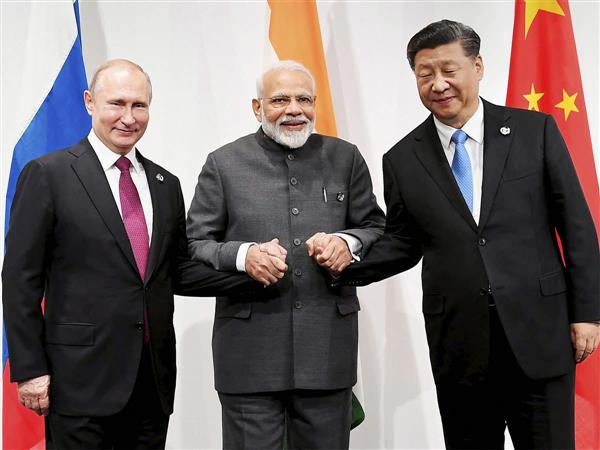 Russian Foreign Minister Sergei Lavrov said on Friday that the Russia-India-China (RIC) grouping could prove useful in promoting trust and confidence between India and China. Refraining from any way in pushing for a RIC summit of the three leaders — Narendra Modi, Vladimir Putin and Xi Jinping, Lavrov said, “If RIC can be useful to strengthen trust and confidence, this is something we are going to support.”

Lavrov thus did not pursue the idea of a RIC summit that was suggested by Russian Presidential aide Yury Ushakov last month, a fortnight after Putin made a rare overseas trip during the pandemic to hold consultations with PM Modi. South Block, in private, had told Moscow that such a summit was impossible as long as India and China were engaged in a tense standoff in eastern Ladakh. Instead, the Russian Foreign Minister seemed to suggest that China and India were better off with a direct dialogue on security issues.

“I know India and China have a direct dialogue on many issues, including security. I know there is a declaration of strategic partnership between India and China,” he said. The RIC format also deals with economic formats of cooperation which are promising, he says. “We highly value our relationship with India,” he added at a marathon three-hour press conference during which a major portion was devoted to Russia’s talks with the West on achieving strategic stability.

Value our relationship with India

If Russia-India-China grouping can strengthen trust, this is something we are going to support. We value our relationship with India. — Sergei Lavrov, Russian foreign minister