Leaving behind life as beggars, 45 children to march in R-Day contingent in Lucknow : The Tribune India

Leaving behind life as beggars, 45 children to march in R-Day contingent in Lucknow 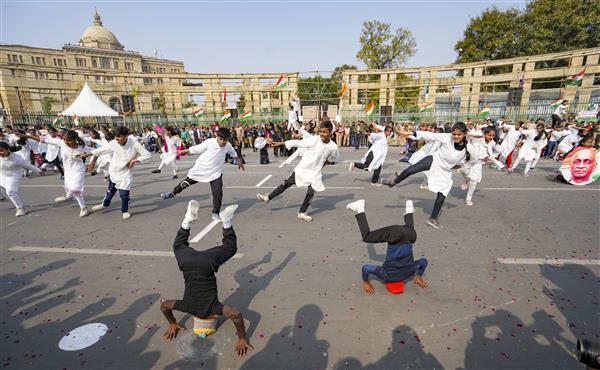 Children perform during the full dress rehearsal of the Republic Day Parade 2023, in front of Vidhan Bhawan in Lucknow, on Tuesday. PTI Photo

Life will take a turn for around 45 young children on Thursday when they march on the Vidhan Sabha Marg as part of a Republic Day contingent, leaving behind their life as beggars.

"These children who would be participating in the parade have come out from begging," said an official of a local NGO that played a key role in pulling them out of their underprivileged lives.

Nine-year-old Mahi, a resident of Chinhat area of Lucknow, is among them. She now aspires to become a doctor.

"I will be giving a dance performance along with my didis," she told PTI, referring to her seniors.

Balbir Singh, founder and secretary of NGO Ummeed, said the children who would be participating in the parade have come out from begging.

"We were engaged with them for the past eight to 12 months. Basically, we worked to infuse a feeling of self-respect and self-prestige. These children were given exposure. They were taken to the Raj Bhavan, and they also interacted with the District Magistrate, Divisional Commissioner and Municipal Commissioner of Lucknow," he told PTI.

"When they went to these places...their self-esteem got awakened, and even the parents of these children supported them to get rid of beggary," Singh said.

Singh said the Union Ministry of Social Justice and Empowerment, Lucknow Municipal Corporation and Ummeed are making efforts to pull out children from begging and integrate them into society's mainstream.

Municipal Commissioner of Lucknow Inderjeet Singh told PTI, "These children who are participating in the parade were earlier involved in begging, and they are going to participate in the Republic Day parade for the first time. The children are highly excited. This is a new concept. UP Governor Anandiben Patel herself had spoken to these children (recently)." The Union ministry of Social Justice and Empowerment has formulated a national level umbrella scheme namely 'SMILE -- Support for Marginalized Individuals for Livelihood and Enterprise'. It includes two sub-schemes -- 'Comprehensive Rehabilitation for Welfare of Transgender Persons' and 'Comprehensive Rehabilitation of persons engaged in the act of Begging'.

This umbrella scheme would cover several comprehensive measures including welfare measures for both transgender persons and persons engaged in begging.

Sixteen-year-old Aditya, who is also a member of the contingent, said he is excited since he is participating in the Republic Day parade for the first time.

Preeti (14), who aspires to join the police, said her parents are feeling happy, as she is doing what they could never dream of.

The 10-year-old Kishna looked confident holding the tricolour high. He could now dream. "I want to become a dancer," he said. "I draw inspiration from Prabhu Deva." His friend Ritik also wants to become a dancer.