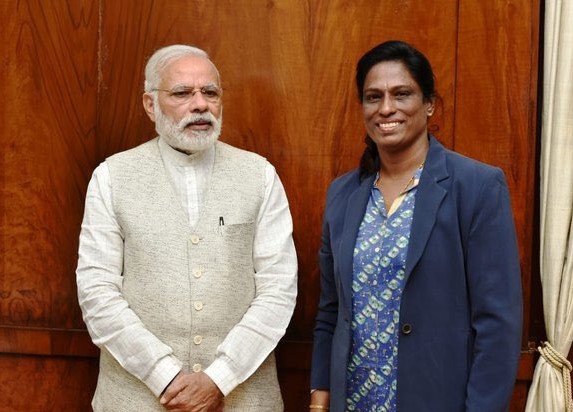 Prime Minister Narendra Modi broke the news on Twitter by posting the news of the government decision to nominate the four personalities, who have achieved generously in their respective fields.

The remarkable PT Usha Ji is an inspiration for every Indian. Her accomplishments in sports are widely known but equally commendable is her work to mentor budding athletes over the last several years. Congratulations to her on being nominated to the Rajya Sabha. @PTUshaOfficial pic.twitter.com/uHkXu52Bgc

He also shared his pictures with Usha and Ilaiyaraaja along with his congratulatory messages in separate tweets.

The creative genius of @ilaiyaraaja Ji has enthralled people across generations. His works beautifully reflect many emotions. What is equally inspiring is his life journey- he rose from a humble background and achieved so much. Glad that he has been nominated to the Rajya Sabha. pic.twitter.com/VH6wedLByC

“The Rajya Sabha nominations show another instance of PM Narendra Modi-led government recognising outstanding Indians who have made a mark in diverse fields. The four nominated members have had illustrious careers in their respective fields and have received national and global recognition. They represent various South Indian states and expand the region’s representation in the Rajya Sabha,” top government source said, adding that the selections were another evidence of the PM’s ‘Sabka saath, sabka vikas’ pledge.

The nominations also signal space for under-represented groups and include a woman, an achiever from the Scheduled Caste category and a member of the Jain minority.

Born in a Kozhikode village of Kerala, PT Usha is one of India’s most iconic sportspersons. Popularly known as the Payyoli Express, she represented India and won medals at various international sporting events, including the World Junior Invitational Meet, Asian Championships, and Asian Games. She has set and broken several national and Asian records.

In the 1984 Olympics, she missed winning India’s first medal in track and field in a photo-finish, finished fourth in women’s 400M hurdles and lost the Bronze medal by 1/100 second.

Born in a Dalit household in a village in Madurai of Tamil Nadu, Ilaiyaraaja is regarded as one of India’s greatest composers. In a career spanning over five decades, he has composed over 7000 songs for more than 1000 movies and performed in more than 20000 concerts across the globe. In 2018, he received the Padma Vibhushan. He is also a Padma Bhushan recipient and has bagged five national film awards besides the Sangeet Natak Akademi Award.

Ilaiyaraaja’s life is a manifestation of how creative geniuses can rise overcoming all hardships including caste-based discrimination.

Also among RS nominees is KV Vijayendra Prasad, born in Kovvur of Andhra Pradesh, one of the country’s leading screenwriters and film directors who has penned several hit Telugu and Hindi movies.  His repertoire includes the highest-grossing films RRR, the Baahubali series and Bajrangi Bhaijaan.

The movies he wrote have transcended regional boundaries and become blockbusters nationally -- a milestone in the journey for national integration and unity.

Vijayendra Prasad bagged the 2016 Filmfare Award for best story Bajrangi Bhaijaan and his son SS Rajamouli continues to break records with his productions.

Karnataka’s Veerendra Heggade, a philanthropist, served as the Dharmadhikari of Dharmasthala Temple in Karnataka since he was 20 years old.

The central government later replicated this model by establishing Rural Self Employment Training Institutes (RSETIs) across India. Heggade also heads the Shri Dharmasthala Manjunatheswara Educational Trust for affordable and quality education through more than 25 schools and colleges. He was awarded the Padma Vibhushan in 2015.