LJP walks out of NDA in Bihar, but ready to back BJP-led govt 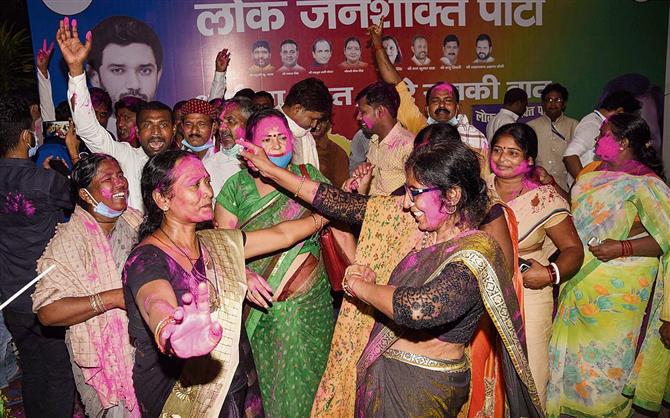 LJP workers in Patna celebrate after the annoucement. PTI

The decision did not come as a surprise to the BJP, which was “aware” of LJP president Chirag Paswan's plan ahead of its Central Election Committee meeting held later in the day. Prime Minister Narendra Modi, Home Minister Amit Shah and party president JP Nadda were present.

The Election Commission on Sunday came out with a set of new instructions to make it more convenient for the elderly and persons with disabilities to exercise the postal ballot option. It has appointed two expenditure observers for the Bihar Assembly elections. The postal ballot would be delivered at the residence of all those aged above 80 years and people with disabilities by the booth-level officer. TNS

The BJP may now end up contesting a larger chunk of seats than the JD-U, which also has to accommodate Jitan Ram Manjhi-led HAM(S) from its quota of seats. Amid speculation over a “fixed match” between the BJP and LJP, the latter gave a hint with its public assurance of support to the BJP in case “it forms the government in Bihar under its own CM”.

The LJP said it would contest 143 seats, mostly the ones the JD-U was contesting. “Owing to ideological differences with the JD-U, we have decided to contest the Assembly elections independently,” the LJP said, adding that it would not contest under Nitish Kumar.

At the same time, it also said it would continue to be part of the NDA at the Centre, citing instances when allies contested against each other, including in Jharkhand where the LJP contested independent of the NDA. “LJP legislators will strengthen the hands of Prime Minister Narendra Modi,” it assured. Political observers who see it as a “fixed match” between the LJP and BJP say Nitish Kumar is facing “massive anti-incumbency and possible loss of ground because of his handling of Covid situation, floods and migrants.”

Will contest 143 seats, mostly against JD-U