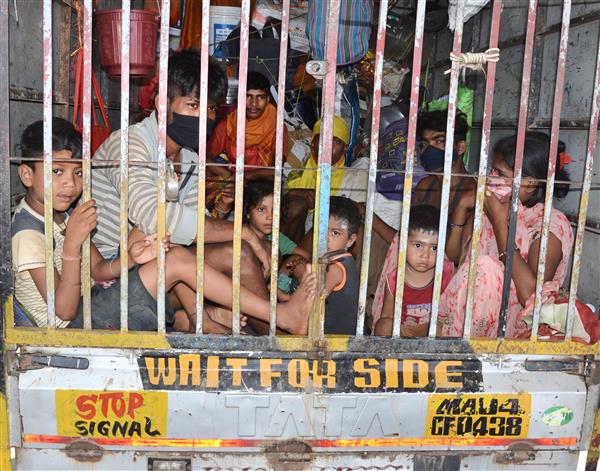 Migrants ride a tempo coming from Maharashtra to reach their native place in West Bengal at Ranchi-Patna National Highway-33, during the ongoing COVID-19 nationwide lockdown, in Ranchi, Saturday, May 16, 2020. PTI

As the government has been preparing to finalise and announce anytime by Saturday night or Sunday morning the guidelines for lockdown 4.0, indications are there that this phase is likely to see major relaxations.

It may include allowing movement of auto-rickshaws, opening of shopping centres and malls and resuming domestic flight operations, but with strict adherence to measures relating to social distancing, wearing of face mask and ban on spitting at public places.

Sources in the Ministry of Home Affairs (MHA) said the entire gamut of the government, including political leadership and administrative heads, are brainstorming to bring in some kind of normalcy after nearly two months of COVID-19 induced lockdown, which has brought the country to an unprecedented halt.

The third phase of lockdown is going to end on Sunday.

The sources indicated that the next phase of “much-relaxed” lockdown would be of another two weeks and plans are afoot to allow metro and bus services, barber shops, restaurants, local markets and home appliance repairing shops to open in the green and orange.

In case of districts falling under red zone, the MHA sources said, the new guidelines are likely to specify localise “containment zone” and in the rest of the district some relaxed norms may be provided to ease the existing strictness.

A senior MHA official said, “Many of the states have sent their suggestions to the Centre and have favoured continuation of lockdown at least till May end under National Disaster Management Act (NDMA). The Ministry has taken note of them and working out a detailed guidelines keeping in mind both risk to life and livelihood.”

The official, however, said, while some states have supported extension of the lockdown, most have asked for easing restrictions as well as more autonomy in deciding demarcation of areas as red, green, orange zones, which as of now is determined by the Centre.

The MHA is especially considering the suggestions of Delhi government which has proposed opening of markets, shopping complexes and operation of buses and metro services with strict social distancing norms, the sources said, while indicating resumption of construction activities in the national capital may be permitted.

Even neighbouring Haryana has favoured extension of the lockdown, but has desired permission to decide what activities should be allowed for a gradual return to normalcy.

Bihar, Jharkhand, Odisha have urged the Centre to extend the lockdown till the end of this month besides keeping air and rail traffic, other than Shramik Special trains, suspended during the period in view of the situation that has emerged following the return of migrants to Bihar from across the country on a large scale.

The West Bengal government, which has been on loggerheads with the Centre on various points, has decided to support Home Ministry’s decision to extend the lockdown but wants the states to be allowed to decide on relaxations in their respective areas.