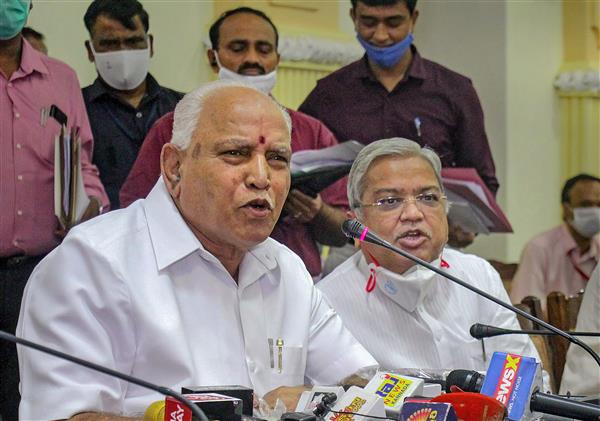 As the exodus of migrant workers triggered by the coronavirus lockdown continued, the Railways said on Wednesday it has ferried over 1.25 lakh stranded people across the country from May 1 in 122 trains, while a fresh row erupted after Karnataka Government withdrew its request for such special trains apparently due to concerns over shortage of labour.

The opposition attacked the BJP government in Karnataka, accusing it of treating migrant workers worse than “bonded labourers”, even as Chief Minister BS Yediyurappa appealed to more than one lakh workers who wished to go back to their native states to stay back as construction and industrial activities have begun.

Yediyurappa announced a Rs 1,610-crore relief package for the benefit of those in distress due to the COVID-19-induced lockdown which included a compensation of Rs 5,000 each for registered workers.

The Principal Secretary in the Revenue Department, N Manjunatha Prasad, who is the nodal officer for migrants, had on Tuesday cancelled the request for 10 Shramik Special trains, apparently after the builders had apprised Yediyurappa about the shortage of labourers if they were allowed to go back to their home states, said a source privy to the issue.

CPI(M) general secretary Sitaram Yechury hit out at the state’s decision. “This is worse than treating them as bonded labour. Does the Indian constitution exist?” he said in a tweet.

A section of migrant labourers from Uttar Pradesh, Bihar, Odisha and West Bengal had created a ruckus in Bengaluru on May 4, demanding that they be sent home.

Many desperate workers said they are keen on returning due to difficult survival conditions. They are also concerned about the wellbeing of their families back home and are apprehensive that they may not be able to return quickly if their kin faced some problems.

Shailesh, a painter from Gorakhpur in Uttar Pradesh, said he had exhausted all the money that he had.

“My elder brother is stuck in Hyderabad whereas I am held up in Bengaluru. Both of us are jobless for the past one-and- half months,” he said.

The first Shramik Special train from Haryana carrying 1,200 migrant workers left for Katihar in Bihar from Hisar railway station even as Chief Minister Manohar Lal Khattar too renewed his appeal to migrant workers engaged in industries not to leave and instead start working in manufacturing units that have been allowed to resume operations.

In Maharashtra, state Minority Affairs Minister Nawab Malik accused the BJP governments in Uttar Pradesh and Karnataka of adopting an uncooperative approach in taking back migrant workers hailing from these two states.

“They are creating new hurdles. There are no such problems in case of other states like Bihar, Rajasthan, Madhya Pradesh and West Bengal though,” he said.

As on Tuesday morning, Gujarat was the originating station for around 35 of these special trains, followed by Kerala with 13.

Among the receiving states, Bihar has accepted 13 trains, with 11 more currently on journey and six more planned, the data accessed by PTI shows.

Uttar Pradesh has received 10 such trains and five more are on their way and 12 more planned, as per the data.

The West Bengal Government has, however, given clearance to only two trains—one each from Rajasthan and Kerala—and they are en route to the state.

Jharkhand has accepted four trains, while five are on their way to the state. Two more Shramik Special trains have been planned.

Odisha has received seven trains and five are on their way to the state, with one more planned, the data shows.

The Odisha Government said a total of 35,540 migrant workers have so far returned to the state.

Earlier, the Centre had drawn flak from opposition parties after the Railways had made these services chargeable.

The Maharashtra Government has sought clarity from the Railways over whether it is bearing 85 per cent of the transport cost of migrant workers heading home amid the lockdown, the state home minister said.

The ruling Trinamool Congress in West Bengal blamed the Centre’s alleged “lack of farsightedness” for the migrant labourer crisis in the country and asked why the PM CARES fund is not being used to finance their journey home.

The party also said it is condemnable that migrant labourers who have been “starving” for over 40 days are being made to pay for their tickets, as is being alleged. PTI