Do not implement this in Punjab and Haryana, try it out in other states: Cong MP Ravneet Bittu 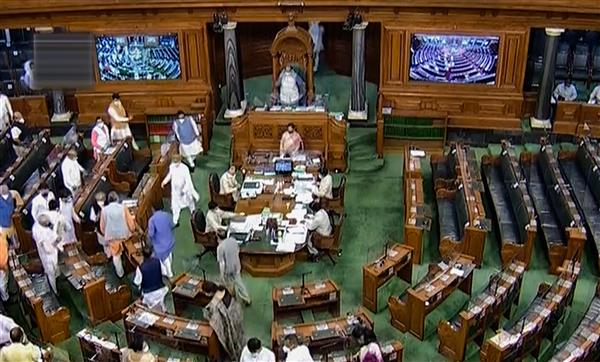 Parliamentarians in the Lok Sabha during the ongoing Monsoon Session of Parliament, in New Delhi, Thursday, September 17, 2020. LSTV/PTI photo

This even as Shiromani Akali Dal, a part of the ruling NDA combine, protested against the bills. Harsimrat Kaur Badal, a Union minister and Akali MP, resigned from the Cabinet.

The Congress and almost the entire Opposition opposed the Bills terming them as ‘anti-farmer’.

The House passed the two Bills — ‘The Farmers’ Produce Trade and Commerce (Promotion and Facilitation) Bill, 2020’ and the ‘Farmers (Empowerment and Protection) Agreement on Price Assurance and Farm Services Bill, 2020’.

More than five hours of debate ensued before the Bills were passed around 9.45 pm on Thursday.

Sukhbir Singh Badal, the President of the Akali Dal and MP from Ferozepur, said “the Bills will ruin what we have created as agriculture infrastructure in Punjab in the past 50 years”. He opposed the Bills vehemently.

Ravneet Singh Bittu, Congress MP from Ludhiana opposed the Bills and termed these as ‘black laws’. He asked the Central Government, “why are you intervening, agriculture is a state subject”.

Bittu asked the government to not implement this in Punjab and Haryana, and try it out in other states. Punjab, he said, was a border state, ‘don’t needle it’. “Sometime you raise SYL and then you come up such Bills,” he said.

Justifying the Bills, Union Minister of Agriculture and Farmers Welfare Narendra Singh termed them as ‘revolutionary’. “Farmer will be free to sell produce anywhere and to anyone, freeing him from selling the produce only at the designated ‘mandi’. Sales done outside the mandi will attract no tax of Centre or state governments.”

The Agricultural Produce Market Committee (APMC), will remain in states, Tomar said, adding that Bills should not be criticised for political reasons. The Minimum Support Price (MSP) system will continue and no contract will be allowed between private trader and farmer that can affect land holding of farmer. Even in case of dispute, the land of the farmer cannot be sold to recover any damages.

Tomar assured that Narendra Modi government is committed to protect the rights of farmers. The government has paid Rs 92,000 crore to farmers across the country through the Direct Benefit Transfer scheme.

The government says the Bills will provide for the creation of an ecosystem where the farmers and traders enjoy the freedom of choice relating to sale and purchase of farmers’ produce. Also, it will provide for a national framework on farming agreements that protects and empowers farmers to engage with agri-business firms, processors, wholesalers, exporters or large retailers for farm services.

On September 16, the Lok Sabha cleared the ‘Essential Commodities (Amendment) Bill, 2020’, amid strong objection from Opposition MPs, who termed the move “anti-farmer and pro-hoarder and pro-corporate”.

The Lok Sabha that assembled for the day at 3 pm on Thursday was adjourned till 4 pm following obituary reference to Tirupati Lok Sabha MP Balli Durga Prasad Rao. He was undergoing treatment for COVID-19 and died at a hospital in Chennai on Wednesday.