‘2,000 passengers reported to be Covid positive out of over 6 million who travelled on domestic flights’ 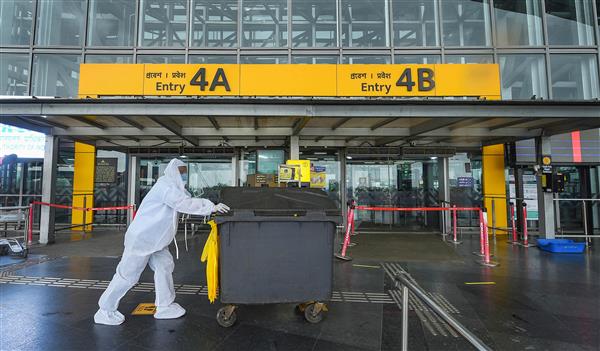 A worker wearing a PPE kit pushes a cart at deserted NSCBI Airport during the biweekly lockdown in the wake of coronavirus pandemic, in Kolkata. PTI

The possibility of getting an in-flight Covid-19 infection is negligible, as borne out by empirical data, a senior Civil Aviation Ministry official said.

Joint Secretary, Civil Aviation, Usha Padhee, told IANS that only about 2,000 passengers have been reported to be Covid positive after reaching their destination out of the over 6 million people, who travelled on domestic flights post resumption till August 24.

“This figure even includes individuals who have been identified via contact tracing,” she said.

“If you see the empirical data, we can certainly say that air travel is the safest and fastest mode of travel.” A total of 6.5 million passengers have travelled from May 25 onwards till August 24.

Currently, the Centre has permitted only 45 per cent capacity utilisation in the domestic sector with effect from June 27, post the initial re-start of operations of scheduled domestic flights, with effect from May 25.

In addition, special and chartered flights are operated with the government’s permission for repatriating Indians and foreign citizens.

“As and when the situation improves, more capacity will be allowed. Till now, a sequential growth can be seen in passenger traffic,” Padhee said.

“At present, on an average, over 90,000 passengers travel on a daily basis. This number will definitely rise. We have also instituted a fare band which is a win-win for the passengers as well as the industry.” Last month, the Centre had extended the time period for limited domestic passenger flight operations and the air fare cap till November 24.

In terms of the fare structure, air routes have been divided into seven sections based on travel time. Each such section has its minimum and maximum fare.

Padhee also said: “The regulator is also carrying out strict financial audits so that safety protocols are not scarified due to financial constraints.” Besides, she pointed out that the Centre has brought in bio-security or public health components in air travel via a multi-level approach.

Padhee also said domestic airlines will be encouraged to expand international operations and that they should use this period to gain experience in operating long-haul flights.

“There has been massive international expansion by some of the domestic airlines in this period. It is encouraging as post-Covid-19, in the new normal, more passengers will be flown out by Indian carriers,” she said.

On whether or not these flights will be maintained post the commencement of normal international operations, she said: “These airlines have been designated to fly abroad.” — IANS