Made in lockdown: Couples recast big fat Indian wedding, get back to simplicity 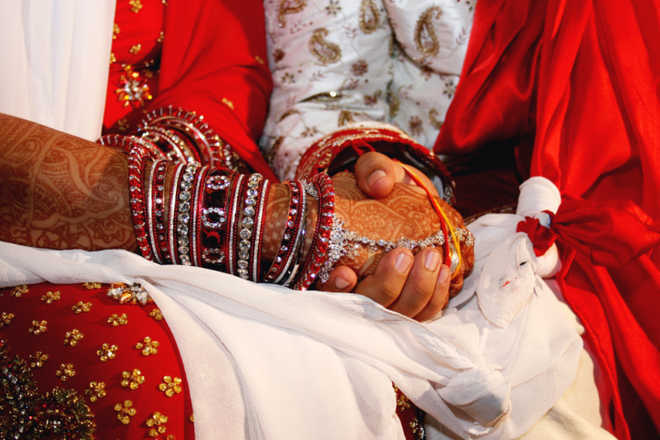 Their plans of tying the knot hopelessly tangled in a pandemic that shows no signs of abating, many a wedding has been postponed but some couples are choosing to get married in simple, intimate ceremonies that are just about them.

Recasting the idea of the big fat Indian wedding—with guest lists running into many hundreds, sometimes up to 2,000, and lakhs of rupees spent on multiple functions and elaborate clothes—couples are going back to the basics on arguably the most important day of their lives.

Retaining the essence of romance and maybe the gravitas that should go with a long-term commitment, they are saying “I do” on rooftops, homes, temples, churches, and sometimes even state borders, with only immediate family in attendance. Sans ‘band, baaja, baraat' and other extra frills, but with masks, sanitisers and social distancing norms in place.

“We didn't have a grand procession, decorations, firecrackers, feasts and relatives, but this was indeed the most memorable experience of my life,” said a bride in Odisha's Jagatsinghpur district who did not want to be named.

"We had earlier arranged for a grand function. But the lockdown threw a spanner in the works. So we decided to donate a part of the money saved for the wedding to help the state combat the pandemic," said Jyoti Ranjan Swain, the groom, a resident of Erasama block in the district.

Apart from the parents, an inspector of the Erasama police station and the block development officer (BDO) attended the wedding.

"This was no social gathering. The couple distributed sweets after the ceremony. It was a simple affair," said the BDO Kartik Chandra Behera.

There have been many unlikely wedding venues over the years, but a checkpost on the Assam-West Bengal border is likely to be top amongst them.

Given the restrictions on movement from one state to the other and mandatory quarantine, the families approached the administrations of both districts for permission.

After much discussion, officials decided the wedding would take place on the Dhubri-Jalpaiguri ‘boundary'.

The bride's father Mahesh Sha said his family accepted the advice of the administration and the priest to go ahead with the wedding despite the odds because it was an auspicious day.

Taufiq Hussain and Abeda Begum also decided to go ahead with their wedding despite the lockdown. They got married at home in Goalpara, Assam, last month with only eight family members present.

"This is the way marriages should always be conducted… among close relatives and people who matter rather than the usual fanfare and large sums of money being spent,” said Hussain.

His words found resonance many hundred miles away in the Tamil Nadu capital Chennai where K Shakthivel got married last month on the terrace of his home.

"It resulted in a saving of at least 75 per cent of the originally planned expenditure of a few lakhs," Shaktivel, an AC mechanic, said.

Only 10 family members were present since the hall he had booked was shut in view of the lockdown. But Shaktivel was content.

And that's how it was for Rebin Vincent Gralan and Cila Lona, too, in neighbouring Kerala. They got married on April 15 at the St. Joseph's parish shrine in Pavaratty with only 10 family members in attendance.  "The date for the wedding was fixed earlier itself… we both convinced everyone to hold the marriage on the same date itself and it was conducted as a low-key function," Gralan told PTI.

There is no point in waiting for the pandemic to end, agreed Alex Paul, a businessman in Ernakulam who is all set to get married on June 15.

"We got engaged almost a year ago and had elaborate plans for a major wedding. But then came coronavirus and the lockdown. Now the wedding date has been decided as it is almost sure that this pandemic scare is not going to end anytime soon,” he said.

His grand wedding was downsized to a small affair at a temple in Karnataka's Mandya district but 30-year-old Ravi Gowda is not complaining. He got married on April 20 as he had planned, and that's all that matters.

"I had invited about 2,000-2,500 people for my wedding at a marriage hall in Bangalore's Rajarajeshwari Nagar on April 20… We got married on the same date at our village temple in Mandya," he said.

He said he spent about Rs 10 lakh for the arrangements in Bangalore, but hasn't got the money back yet.

Not everyone wants to get married without family and friends though. Shraddha Patel in Chhattisgarh's Durg district, for instance, was supposed to get married on May 17 but has postponed the plans.

"I don't want a lavish wedding with hundreds of guests, but at least I want my close friends and relatives to be present there on the occasion. We are trying to figure out when to hold the wedding," the 24-year-old teacher told PTI.

There are also those who got married with parents looking on – virtually.

Research analyst Chaitanya and IT professional Thanuj were going to get married on April 30 in Kannur in Kerala but could not because of the lockdown. They waited and finally tied the knot on May 24 in Bangalore at the bride's uncle's home with 12 relatives present.

“The lockdown was getting extended and the virus cases were surging. There was no point in waiting as the uncertainty was continuing,” the bride's father A K Sudhakaran told PTI.

Most of his daughter's jewellery was in a bank locker at Kannur so a few gold ornaments were bought for the big day. Both sets of parents and other close relatives saw the event on Zoom.

A businessman in Patna also went ahead and got the eldest of his three daughters married at a temple rather than wait for the lockdown to end.

“Everything was finalised. Even the engagement and ‘tilak' functions were done before the lockdown, so I decided to get my daughter married at a temple,” the father told PTI on the condition of anonymity.

Sneha Anil Mahajan, a mother in Nagpur whose daughter got married on May 8 said the family decided not to postpone the wedding because the date was an auspicious one.

“Only about 45 to 50 guests attended. We had a guest list of over 1,000 people but it was not possible to invite them in such health crisis,” she said.

“All the guests were given sanitisers and masks and we strictly followed social distancing norms. Each ritual was explained in detail which normally would not have been possible. A marriage to remember for a lifetime. We have no regrets,” said the mother, looking forward to a grand reception once the pandemic is behind everybody.

And sometimes, the young just overcome every obstacle on the way.  Like 19-year-old Goldie, who earlier this month walked 80 km from Kanpur to Kannauj in Uttar Pradesh to wed her fiance alone, unafraid and determined that the continuing lockdown would not interfere with their plans.

When lockdown throws a hurdle on the way to matrimony, just jump it – that's what young couple seems to be saying as the coronavirus continues its spread. PTI