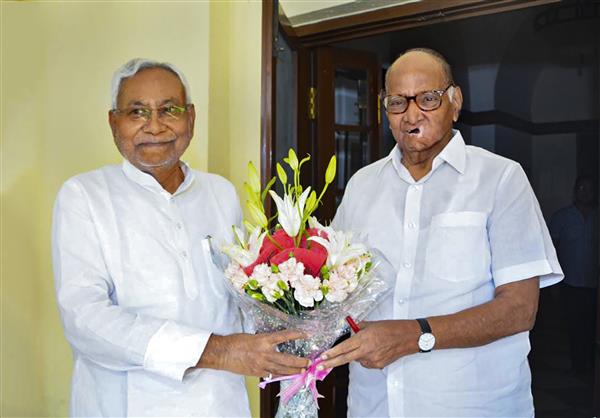 Bihar Chief Minister Nitish Kumar on Wednesday called for a “main front” of all non-BJP parties to take on the ruling alliance in the 2024 Lok Sabha polls and asserted that the decision on its leadership can be taken later.

Speaking to reporters after he wrapped up his meetings with several opposition leaders since September 5, Kumar said he had a very positive discussions with them and expressed the hope that they will gradually veer towards having a structured programme and agenda.

Kumar, who last month severed ties with the BJP and formed a new government in alliance with the RJD-Congress-Left bloc, also played down the reservations parties like the AAP and the TRS have about the Congress, saying he has spoken to everyone and they have been responding.

To a question about the possibility of a non-BJP and non-Congress “third front”, which was experimented with in the past, he said “If a front has to be made, it will be the main front, not the third front.

“An understanding between the Congress, the Left, parties with socialist background and others will be in national interest. If all non-BJP parties in various states come together, then a good atmosphere will emerge in the country.” In a swipe at the BJP, he alleged it has been running a one-sided agenda and its efforts are mostly confined to stoking tensions in society.

Little work has been done by this government but it puts a lot of emphasis on propaganda and publicity, he said referring to the Prime Minister Narendra Modi-led dispensation.

Kumar, who first joined hands with the BJP during the Vajpayee-Advani era in 1996, compared the work done by the Atal Bihar Vajpayee-led government with that of the Modi dispensation.

The Bihar chief minister also slammed his former colleague and political strategist Prashant Kishor, who has said that Kumar’s decision to switch alliance will have a regional and not national impact, and called him a “publicity expert”.

Does he know how much work has been done since 2005, he wondered and suggested that Kishor may be working to help the BJP covertly. “’His statements have no meaning,” he said.

After holding talks with Pawar, the JD(U) leader said it is important for the opposition parties to come together first and a decision on its leadership can be taken later. He reiterated that he is not in contention for it.

The JD(U) leader said the time was ripe to present an alternative to the BJP which, he alleged, was “not doing anything for the people”.

“Both Pawar and I are keen to unite opposition forces who are not with the BJP. A leader of the alliance can be decided later. It is important to come together first,” Kumar told reporters after a 30-minute meeting with the NCP supremo.

Kumar has been meeting opposition leaders during his three-day visit to the national capital in a bid to bring them on one platform to take on the BJP.

The Bihar chief minister said he would come to Delhi again to meet Congress president Sonia Gandhi, who has been travelling abroad for personal reasons.

“I have met all the people in Delhi and many of them thanked me for coming out of the NDA. Everyone wishes that there should be unity in every state and such an atmosphere will be created in the country in the coming days,” Kumar said after meeting CPI (ML) leader Dipankar Bhattacharyya, one of his oldest allies.

The JD(U) leader said that everyone is talking about opposition unity and “more than a face, a united front was required for the country”.

“Everyone realises that those who have the power in their hands, they are creating damage everywhere in the country,” he added.

There are 16 MLAs of Left parties in the Bihar Assembly supporting the Nitish government from outside, these include 12 of CPI(ML), two each of CPI and CPM.

After meeting with CPI(ML) General Secretary, Kumar said, “Seven political parties united in Bihar and we are running the government together, while on the other side there is only BJP.” “We had a discussion on how to work for the development of the state with consensus, how to uplift every section of the society and the work has to be done for the welfare of people.” Bhattacharya said they discussed how a united opposition should work towards stopping the BJP’s “bulldozer raj” in the country.

“It is good that Nitishji is trying to get the Opposition together. The way that the BJP is trying to make India a one-party nation, we will have to fight together as one to thwart BJP’s attempt to undermine democracy,” said Bhattacharya.

Though Nitish Kumar has constantly tried to play down the buzz about his prime ministerial bid, there has been a clamour within his party that Kumar is the most appropriate candidate to take on the mantle of the opposition leadership due to his vast experience and clean image.

Asked about his aspirations to become prime minister, Kumar had said on Tuesday, “This is wrong. I am not a claimant for the post, nor am I desirous of it.”