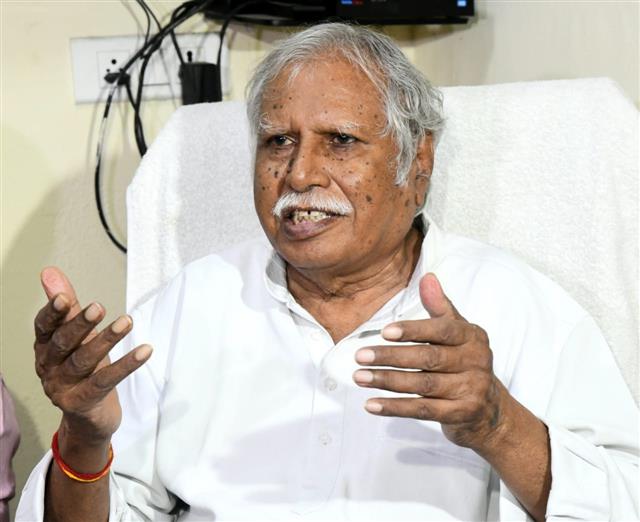 With chances of Ashok Gehlot staying Rajasthan Chief Minister after clearly indicating where his heart lays, Mallikarjun Kharge, Mukul Wasnik and Digvijaya Singh have entered the race for Congress presidency, though there is no official word on their bids yet.

Leader of opposition in Rajya Sabha Mallikarjun Kharge appears a possible consensus candidate after Ashok Gehlot engineered a sort of coup to retain Rajasthan and ward off a challenge from rival Sachin Pilot.

With high Gandhi loyalty factor favouring him, Kharge could be asked to file his papers for the party presidential nomination in which case, another leader of opposition would have to be named which could be former Madhya Pradesh CM Digvijaya Singh.

If the party settles for a younger face, AICC general secretary Mukul Wasnik could be a probable. His name was once in contention earlier but the chance didn’t materialise.

Digvijaya Singh has said he won’t run for the party president but with the circumstances evolving fast, the situation has become very fluid and Congress president Sonia Gandhi is looking for an acceptable face.

Meanwhile, Chairman of AICC Central Election Authority Madhusudan Mistry met Sonia on Tuesday to hand her the identity card of a delegate for Election Day.

The card of former PM Manmohan Singh is also ready to be delivered to him, as those of Rahul and Priyanka Gandhi.

Mistry on Tuesday said so far only Shashi Tharoor’s nominee had collected the papers for the Congress presidential election.

He said AICC treasurer Pawan Bansal had taken two nomination papers from the office but these “were for someone else and not for Bansal”.

When contacted, Bansal said he has handed over the papers to the Chandigarh Congress Committee as he was visiting Chandigarh for a day. There’s nothing to be read in this, Bansal said.

Meanwhile, AICC observers for Rajasthan Kharge and Ajay Maken will submit their report on Rajasthan crisis to Sonia on Tuesday.

Indications are that Gehlot will stay the CM, and the party may issue a show-cause notice to some ministers for holding a parallel MLA meeting on Sunday, leading to the cancellation of the official meet, an act of “indiscipline” in the eyes of the observers.