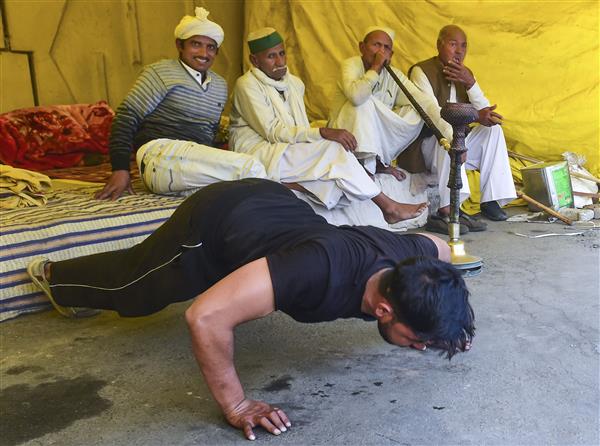 Farmers exercise during their ongoing protest against the new farm laws, at Ghazipur border in New Delhi. PTI

A 25-year-old man from Sikhera village in UP’s Baghpat bet Rs 5,100 and 5 kg of almonds with his friends that he could run from his village and reach the farmers’ movement at the Ghazipur border.

Monu Dagar told IANS: “I had a bet on 5 kg of almonds and Rs 5,100 to run from my village to the Ghazipur border, where farmers’ protest is going on. I have won the bet and will be meeting the farmers’ leader Rakesh Tikait soon.”

Monu started from his village at 11 am on Sunday and reached the border at 4 pm. His health deteriorated due to the continuous running following which he is being treated at a medical camp at the border.

Monu’s friend Akash who had accompanied him, told IANS: “Monu is a good runner so the villagers had a bet that anyone who runs from the village to the border will be rewarded.”—IANS