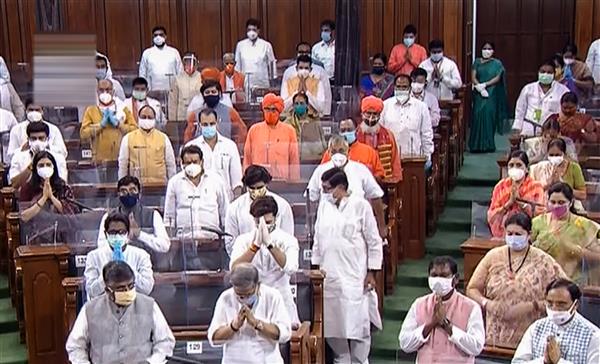 MPs pay tribute to ex-president Pranab Mukherjee, legendary Indian classical vocalist Pandit Jasraj and others who passed away this year, during the opening day of Parliament's Monsoon Session amid the ongoing coronavirus pandemic, at the Parliament House in New Delhi on Monday, September 14, 2020. (LSTV/PTI Photo)

The grand heritage chamber of India’s house, the Lok Sabha, has never looked stranger than it did on Monday morning as MPs led by Prime Minister Narendra Modi gathered in its precincts to mark the commencement of the Monsoon Session of Parliament.

This is the first occasion when Parliament has met under the looming shadow of the Covid pandemic.

The shadow was visible in the Lok Sabha which lacked its usual zing and bonhomie as MPs sat separated by plastic shields to ensure the safe two-yard distance, which is part of the Health Ministry’s Covid protocols.

Every MP sat at a distance of one seat from each other with PM Modi, Defence Minister Rajnath Singh and senior minister Narendra Tomar in the front treasury rows.

The first bench on the opposition side was empty with Congress president Sonia Gandhi staying away.

MPs sporting masks of varied descriptions added colour to the otherwise staid surroundings but the trademark energy of the lower house was missing after Speaker Om Birla declared the proceedings open.

He too wore a mask, removing it only to pay condolences to Pranab Mukherjee, doyen of Indian classical music Pt Jasraj, sitting MP A Vasanth Kumar and 13 former MPs, including Punjab Finance Minister Manpreet Badal’s father Gurdas Badal, a former member of the Lok Sabha.

The commencement of the proceedings was sombre with the house remembering its old members, especially Pranab Mukherjee whose photographic memory and encyclopaedic knowledge of Indian political history was part of Om Birla’s glowing tributes to the late leader.

As per recent practice initiated by the ruling NDA of not adjourning the house for the day after obituary references, the Speaker adjourned the proceedings for an hour after which two health-related bills are expected to be taken up in the Lok Sabha.

Health Minister Harsh Vardhan was in the Lok Sabha and was seen making preparations to pilot the bills.

Among prominent absentees on day one were Sonia Gandhi and her son Rahul Gandhi, both away to the US.

Some new Lok Sabha MPs watched the house proceedings from the visitors’ galleries on the first floor where they were seated to maintain the mandatory social distance in the Lok Sabha chamber.

Overall, Parliament wore a deserted look on day one with sparsely visited compounds and galleries bearing witness to these unprecedented times.

A few MPs did seem to break the two-yard distance rule inside the chamber for some time to catch up on old times when the Speaker adjourned the house for an hour.

That apart, physical distance was the flavour of the day as Parliament proceedings rolled on.