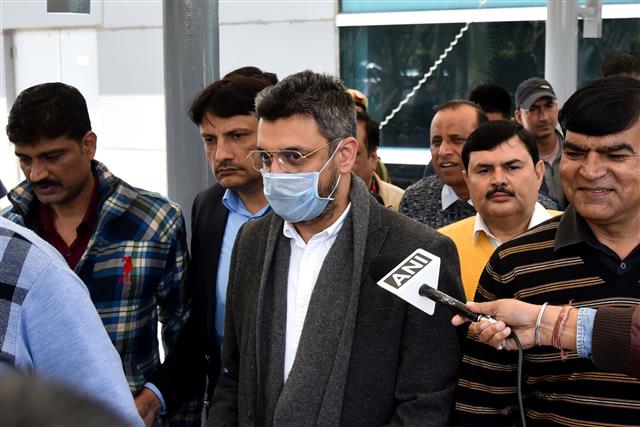 Sanjeev Chawla (C) is escorted out of the Indra Gandhi International Airport upon his extradition from London, in New Delhi. AFP

Sanjeev Chawla, alleged bookie and key accused in one of cricket’s biggest match-fixing scandals that involved former South African captain Hansie Cronje, got an interim relief from custodial interrogation with the Delhi High Court on Friday sending him to Tihar jail till further orders.

A trial court had on Thursday sent Chawla to 12-day custodial interrogation by Delhi Police, noting that the matter was to be probed further for which he has to be taken to various cities across the nation.

Chawla, extradited from the UK, has challenged in the high court the trial court’s order sending him to police custody saying that during the extradition proceedings, the Ministry of Home Affairs (MHA) had given assurance to the UK government that he will be kept in Tihar jail only to face trial.

Justice Anu Malhotra asked the Crime Branch of Delhi Police to file a status report in the matter and directed that Chawla be lodged in Tihar jail here in terms of the letters of MHA till further directions of the court.

The court further said it is essential to hear the Centre in the matter as the letters of assurances were issued by the MHA.

It issued notice to the MHA in the matter and listed it for hearing on February 19.

Senior advocate Vikas Pahwa, representing Chawla, said the accused will now be kept in Tihar jail under judicial custody till further orders of the court.

Public Prosecutor Kewal Singh Ahuja sought time to file the status report on behalf of the state as the investigating officer was not present.

Initially, the plea was mentioned before a Division Bench which agreed to list it for hearing during the day. The plea was listed before Justice Manoj Kumar Ohri who recused from hearing the matter and it was then marked to Justice Anu Malhotra.

During the hearing, Pahwa said Chawla was a British national and while seeking his extradition, the Indian government had given diplomatic assurances to the government of UK that he will be kept at Tihar jail during his detention in pre-trial and post conviction.

He argued that the investigation qua Chawla, also represented through advocate Hemant Shah, was already complete and extradition process starts only when the probe is concluded and further probe was not permissible here.

“He is called to Indian only to face trial. The authorities have violated their undertaking given to the UK government. The charge sheet says the investigation is complete. There is no scope of probe against him,” he said.

Chawla, in his plea, claimed that the additional chief metropolitan magistrate has “wrongly and erroneously, without appreciating the facts and/or law, directed detention of the petitioner in police custody” and that he was kept in illegal custody.

In unambiguous terms they stated that the petitioner during his detention in pre-trial and post conviction will be kept at Tihar jail, it said, adding that it was categorically stated that Chawla’s extradition was sought only to face trial and not for investigation.

The trial court was earlier informed that Chawla, who was extradited from London on Thursday, was involved in fixing of five matches and has to be taken to various places and confronted with certain people in order to unearth the larger conspiracy.

Cronje, who died in a plane crash in 2002, was also involved, police had told the court.

Chawla is alleged to have played a central role in conspiring with Cronje to fix a South African tour to India in February-March 2000.

The British court documents say Chawla is a Delhi-born businessman who moved to the United Kingdom on a business visa in 1996, but continued to make trips to India. — PTI