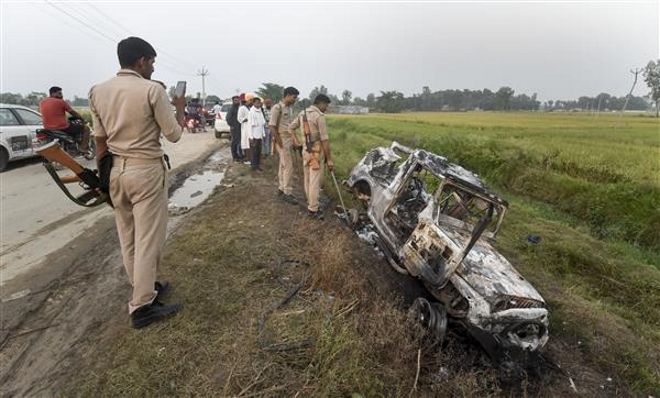 One of the FIRs UP Police have registered in the Lakhimpur Kheri violence mentions that the October 3 violence that killed eight persons was part of a “well-planned conspiracy” by MoS (Home) Ajay Mishra and his son Ashish Mishra. File photo

One of the FIRs UP Police have registered in the Lakhimpur Kheri violence mentions that the October 3 violence that killed eight persons was part of a “well-planned conspiracy” by MoS (Home) Ajay Mishra and his son Ashish Mishra.

Editorial: Mowing down protest: If video clip is genuine, Centre should act now

The FIR, registered at the Tikonia police station by Jagjit Singh, alleges Ashish, accompanied by 15 to 20 armed persons, was going in a three-vehicle convoy.

“Ashish was seated on the left side of his vehicle and fired at farmers as it rammed into them. Due to the firing, a farmer, Gurwinder Singh, died on the spot. Three other speeding vehicles rammed into the farmers walking along both sides of the road. The vehicles overturned and passersby were also injured. Ashish then ran towards the sugarcane fields while firing and hid there," says the FIR.

The FIR adds the "these acts were committed by the MoS (Home) and his son under a well-planned conspiracy."

A counter FIR has also been lodged by the cops on the complaint of the family of Mishra's driver Hari Om. It says Hari Om was allegedly beaten to death by certain miscreants among the farmers. The FIR says the farmers had gathered at the playground of Maharaja Agrasen Inter College, which was to serve as a helipad for UP Deputy Chief Minister Keshav Prasad Maurya, who was to attend a function organised by Ajay MIshra.

“The farmers had gathered to protest against provocative statements of Ajay Mishra,” the FIR says. — TNS