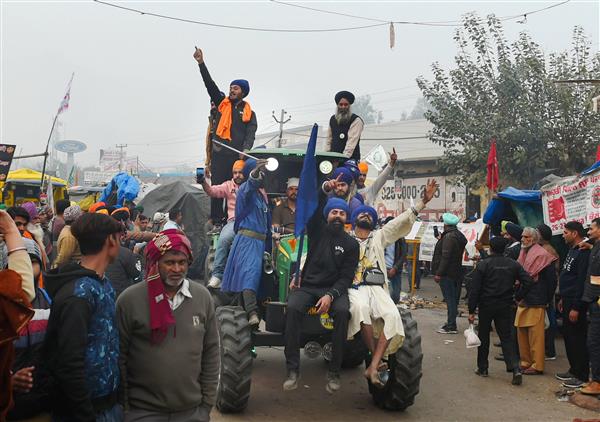 The Samyukta Kisan Morcha said on Friday that "misconceptions" are being spread about the proposed tractor march on January 26 and that their “motive is not to harm the Republic Day parade”.

“We are making it clear that we have no motive to harm the parade of the Government of India by this parade of farmers.  The detailed plan for this parade will be delivered only after a meeting of farmers' organisations on January 17 and the hearing of the Supreme Court on January 18,” Dr Dashan Pal said.

Balbir Singh Rajewal also urged everyone to maintain peace and harmony and not pay heed to “false and unfounded inflammatory propaganda and rumour-mongering” like "unfurling the national flag at the Red Fort etc".

“Misconceptions/false inflammatory propaganda is being spread about the January 26 movement. Some people are saying that the national flag should be hoisted at the Red Fort, some are saying the Parliament will be stormed,” Rajewal said, accusing “anti-farmer forces and government agencies” of trying to malign and scuttle the peaceful agitation of farmers and common people.

“We urge farmers to be aware of such organisations which are breaking the unity among us," they said.

Though Samyukta Kisan Motcha leaders said they are yet to finalise the contours of January 26 tractor march, BKU leader from Uttar Pradesh, Rakesh Tikait, has already announced programme for the day. He said on Thursday that farmers will hold a simultaneous parade from Red Fort to India Gate on Republic Day.

“The Republic Day Parade has been cut short, it will now be from Rastrapati Bhawan to India Gate, I am told. Farmers will march from Red Fort to India Gate and meet the Republic Day parade there. Jawans marching from one side and kisans from the other and meeting at the Amar Jawan Jyoti (at India Gate), It will be a historic moment," Tikait said.