Mission UP: BJP reaches out to Jats in election-bound state 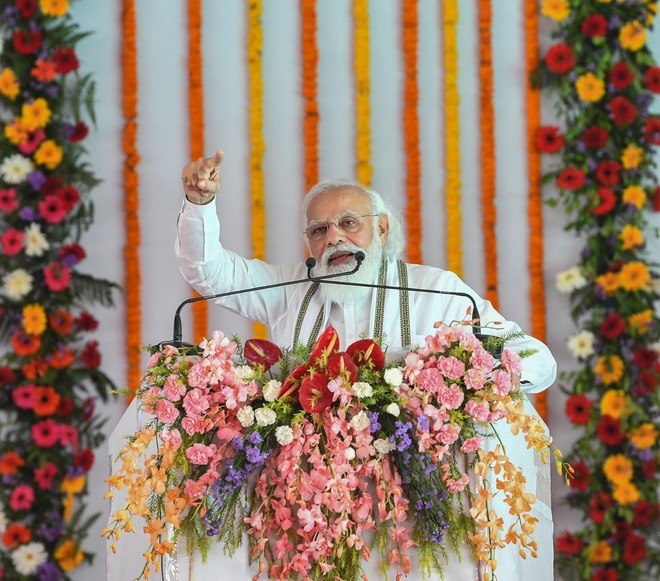 “Raja Mahendra Pratap Singh dedicated his entire life to the country’s freedom struggle and nation building. His teaches us the indomitable will and willingness to go to any extent to fulfil our dreams,” he said.

New industries will come up to support the manufacture of small arms, armaments, drones and aerospace-related products in the Aligarh Node of the Defence Corridor.

Prime Minister Narendra Modi on Tuesday said the country was moving from being a major importer of defence products to becoming an exporter.

“It was the country’s misfortune that after Independence, the next generations were not made aware of the sacrifices made by Mahendra Pratap Singh and many other great personalities. The 21st century India is correcting the mistakes of the 20th century,” he said, laying the foundation stone of the Raja Mahendra Pratap Singh State University in Aligarh where the Aligarh Muslim University, for which he “leased land” is also located.

“Be it Maharaja Suheldevji, Deenbandhu Chaudhary Chhotu Ramji or now Raja Mahendra Pratap Singhji, sincere efforts are being made in the country to acquaint the new generation with their contribution to nation building,” he said in an obvious jibe at the Congress which dominated the political scene for most part of the post-Independence era.

Speaking from western UP, the hotbed of the agitation against the three Central farm laws and for higher sugarcane prices, the PM also invoked former Prime Minister and Jat leader Chaudhary Charan Singh to reiterate his government’s commitment towards small farmers.

Rashtriya Lok Dal (RLD) chief Jayant Chaudhary, who is a grandson of Charan Singh, is one of the main challengers against the BJP in western UP.

Taking a swipe against another rival, the Samajwadi Party, the PM said people could not forget the “scams and corruption” in the state before the BJP came to power. “There was a time when UP was run by goons and mafia, who are all behind the bars now. With Yogiji in power, criminals think twice before committing a crime,” he said, showering praises on CM Yogi Adityanath while enumerating benefits of a “double engine” government.