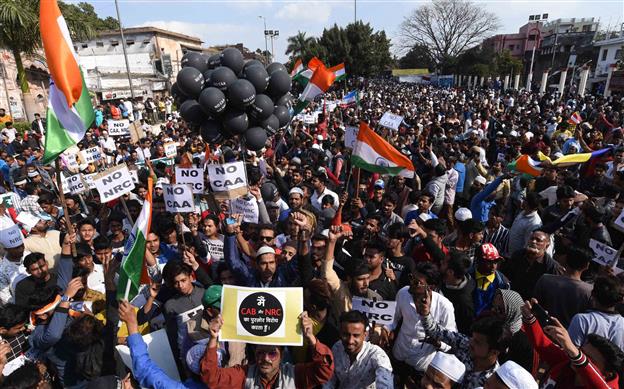 Protesters raise slogans against the amended Citizenship Act and National Register of Citizens during Bharat Bandh at Iqbal Maidan in Bhopal on Wednesday. PTI photo

Reports of clashes came from Dhule in Maharashtra, while Gujarat’s Surat witnessed stone-pelting. Violence was also reported in Udaipur in Rajasthan.

Clashes were reported in Maharashtra’s Dhule, while sporadic violence was also reported in Yavatmal, Aurangabad and some other places during a Bharat Bandh called by some organisations against the Citizenship (Amendment) Act.

The police fired four rounds in the air and lobbed six tear gas shells to disperse a violent mob in Dhule, an official said.

The incident took place on Hundred Feet Road in the limits of the Chalisgaon Road police station on Wednesday afternoon during a rally against the CAA and the proposed National Register of Citizens (NRC).

A large number of Muslims participated in the rally, the police officer said.

A group from the Hindu community also gathered at the spot and started shouting slogans in support of the CAA and NRC, which was followed by a clash and stone-pelting from both sides, the officer added.

To disperse the mob, police fired four rounds in the air and lobbed six teargas shells, he said.

The situation was under control and police personnel have been deployed in large numbers in the area, he added.

Besides Dhule, there were incidents of ‘Rail Roko’ (blockade on railway tracks) at Balapur in Akola district and stone-pelting in Washim and Yawatmal districts of the state, the police said.

At Yavatmal, police used baton-charge to disperse the mob after two groups clashed.

In Aurangabad district, a civic-run bus was pelted with stones at Harsul while a state transport bus was attacked near Himayatbag.

In Palghar near Mumbai, ten persons were detained for trying to enforce the shut-down. Protesters also tried to block the Mumbai-Ahmedabad highway near Vasai.

In Thane district, impact of the shut-down call was felt mainly in Bhiwandi, Mumbra and Ulhasnagar.

At Ulhasnagar, the police detained some persons for trying to take out a protest march in defiance of prohibitory orders.

The suburban train traffic in Thane district was not affected, the police said.

The call for shut-down also received good response in Mumbra in neighbouring Thane district and Taloja, Vashi and Panvel in Navi Mumbai.

"We had decided to keep shops and other establishments shut to protest against the CAA and NRC," Shabana Chowdhary, who owns a boutique in Kurla Pipe Road area, said.

Nagpada resident Salim Qureshi said that Muslims were "living in fear" ever since the CAA was passed by Parliament.

At least 47 protesters were arrested on Wednesday during a ‘Rail Roko’ (train blockade) at Kanjurmarg station in Mumbai.

At least 100 protesters gathered on the tracks around 8 in the morning, affecting suburban services of the Central Railway briefly, the Government Railway Police (GRP) said.

Thirty-three men and 14 women were arrested, the police added.

As the protest took place during peak hour, angry commuters who were held up at Kanjurmarg station clashed with the protesters who had stopped trains bound for the Chhatrapati Shivaji Maharaj Terminus in south Mumbai.

The protesters shouted slogans and waved the national flag before GRP personnel removed them from the tracks.

Multiple organisations, including Bahujan Kranti Morcha, had called for Bharat Bandh in protest against the recently passed CAA and the proposed NRC.

BKM members vandalised a shop here on Wednesday and created a ruckus while forcibly trying to shut down shops during a protest against the amended Citizenship Act, police said.

Five policemen were injured in the ruckus that ensued when the protesters gathered outside the collectorate, they added.

"They vandalised one shop and forced the shopkeepers to participate in the bandh. They later assembled in front of the collectorate and created a ruckus. Some of them also injured five policemen," Additional SP (Udaipur) Gopal Swarup Mewara said.

They also forced shops in Dhan Mandi, Delhi Gate and nearby areas to shut down, he said.

Mewara said police had to resort to cane charge to disperse the unruly mob. "Cases are being registered," he said, adding that no arrest have been made so far.

Incidents of road blockade and stone-pelting were reported during the `Bharat Bandh' called by various organisations to protest against the Citizenship (Amendment) Act (CAA) in Gujarat on Wednesday, police said.

A police officer was injured in stone-pelting in Surat.

A group of masked persons pelted stones at police personnel near Madina Masjid in Limbayat locality of Surat, injuring an assistant sub-inspector, a senior official said.

The police brought the situation under control after dispersing the crowd with baton-charge, and patrolling has been stepped up in the area, he said.

At least 70 persons were detained after they tried to block a road by burning tyres in Katargam area of Surat city.

Over a dozen protesters were detained and the traffic was restored, the officer said.

Markets remained closed in parts of Vadodara, Bharuch and Surat cities. Western part of Bharuch city and nearby villages wore a deserted look.

The shut-down had a visible impact at Kurchan, Luwara, Palej and some other villages near Bharuch city.

In Bhavnagar city, 24 BKM activists were detained when they were appealing people to close their shops.

BKM members were also seen appealing people to keep their establishments closed in parts of Vadodara.

The bandh call got a mixed response in Lucknow.

In the Muslim-majority old city, traders downed shutters over the Citizenship (Amendment) Act and the National Register of Citizens (NRC). But there was no impact of the shutdown call in other areas like Hazratganj and Gomti Nagar.

Police said no untoward incident was reported anywhere in the city.

In Deoria, former Rajya Sabha MP Aas Mohammad and his wife were detained by police near the Salempur area when they were heading towards Subhash Chowk to register their protest against the CAA and the NRC.

When information about the detention of Mohammad and his wife spread, locals rushed to the Kotwali police station demanding their release.

"My wife and I had decided that we will hold a peaceful protest but police detained us," Mohammad said.

When contacted, Superintendent of Police, Deoria, Sripati Mishra said, "The former MP and his wife were taken to Kotwali police station as there was a possibility that the protest will affect law and order negatively".  Pamphlets were distributed Tuesday evening in Muslim-dominated areas asking people to observe shutdown in protest against the amended citizenship law and the NRC.

In Gorakhpur, the response to the bandh call was seen in a few areas.

The contentious Citizenship Act grants citizenship to non-Muslim refugees from Pakistan, Bangladesh and Afghanistan who fled their home countries due to religious persecution. PTI