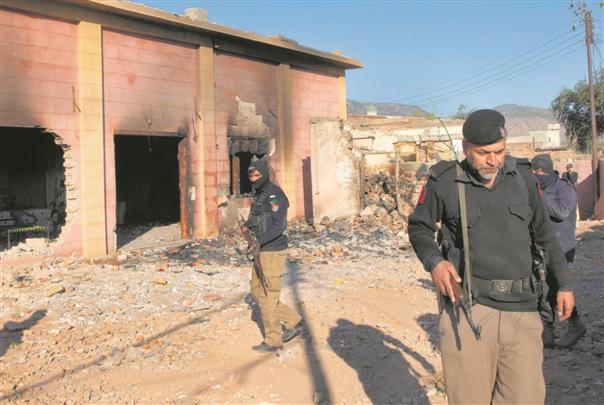 Photo for representation only. AP

A mob attacked a Hindu temple in a remote town in Pakistan's Punjab province, damaging idols and burning down parts of it, prompting Chief Justice Gulzar Ahmed to express "grave concern" over the incident and fix the matter before court for hearing on Friday.

Police said the mob attacked the Hindu temple at Bhong city of Rahim Yar Khan district, some 590 kms from Lahore, on Wednesday in reaction to an alleged desecration of a Muslim seminary by a minor Hindu boy.

The eight-year-old Hindu boy last week had allegedly urinated at a library of the seminary that caused tensions in Bhong, where Muslims and Hindus have been living peacefully for decades.

A police officer said the boy was arrested last week and booked under the blasphemy laws but subsequently released on bail for being a minor.

He said a part of the temple was also burnt down.

Sarfraz said the law enforcement agencies have controlled the situation and managed to disperse the mob. "Rangers have been called and deployed around the Hindu temple," he said.

India on Thursday summoned the Pakistani charge d'affaires in New Delhi and lodged a firm protest, expressing grave concerns at this reprehensible incident and the continued attacks on the freedom of religion of the minority communities and their places of religious worship in Pakistan.

On Wednesday, ruling Pakistan Tehreek-i-Insaf parliamentarian Dr Ramesh Kumar Vankwani posted videos of the temple attack on his Twitter wall, requesting law enforcement agencies to rush to the spot to stop its "burning and vandalising".

Vankwani met Chief Justice Ahmed on Thursday and informed him about the attack on the temple.

Chief Justice Ahmed "showed grave concern over the tragic incident," said a statement issued by the apex court on Thursday.

"Taking cognizance of the issue, the chief justice has fixed the matter before court on Friday at Islamabad with the directions to Chief Secretary of Punjab and IGP Punjab to appear along with a report on Friday," the statement said.

Prime Minister Khan had directed the district administration to probe the matter and take strict action against the culprits, he said.

Earlier in a series of tweets, Vankwani said, "Attack on Hindu temple at Bhong City District Rahimyar Khan Punjab. Situation was tense since yesterday. Negligence by local police is very shameful. Chief Justice is requested to take action." He further said, "Strict action must be taken against those who attacked Hindu temple at Bhong. In contact with higher authorities. Situation is very critical right now." "Chief Justice is requested to take action, please. Interfaith harmony is need of time," he said.

District Police Officer Sarfraz said that some 100 Hindu families are living in the area and police have been deployed there to thwart any untoward incident. He said no arrest has been made so far.

"Our first priority is to restore law and order and provide protection to the minority community," Sarfraz said.

Another police official said the temple has been damaged badly.

On Wednesday, Sarfraz said that after a social media post inciting people of Bhong to take revenge for desecration, the mob started gathering outside the temple and attacked it.

"We will arrest those miscreants who incited people to attack the temple," he said.

In December 2020, a century-old Hindu temple was vandalised by a mob in Terri village in Khyber Pakhtunkhwa's Karak district.

The apex court, which took notice of the attack, had ordered authorities to start the reconstruction of the temple that was vandalised by the mob and instructed them to recover the money for the restoration work from the attackers, whose act has caused "international embarrassment" to the country.

According to official estimates, 75 lakh Hindus live in Pakistan. However, according to the community, over 90 lakh Hindus are living in the country.

The majority of Pakistan's Hindu population is settled in Sindh province, where they share culture, traditions and language with Muslim residents. They often complain of harassment by the extremists. — PTI