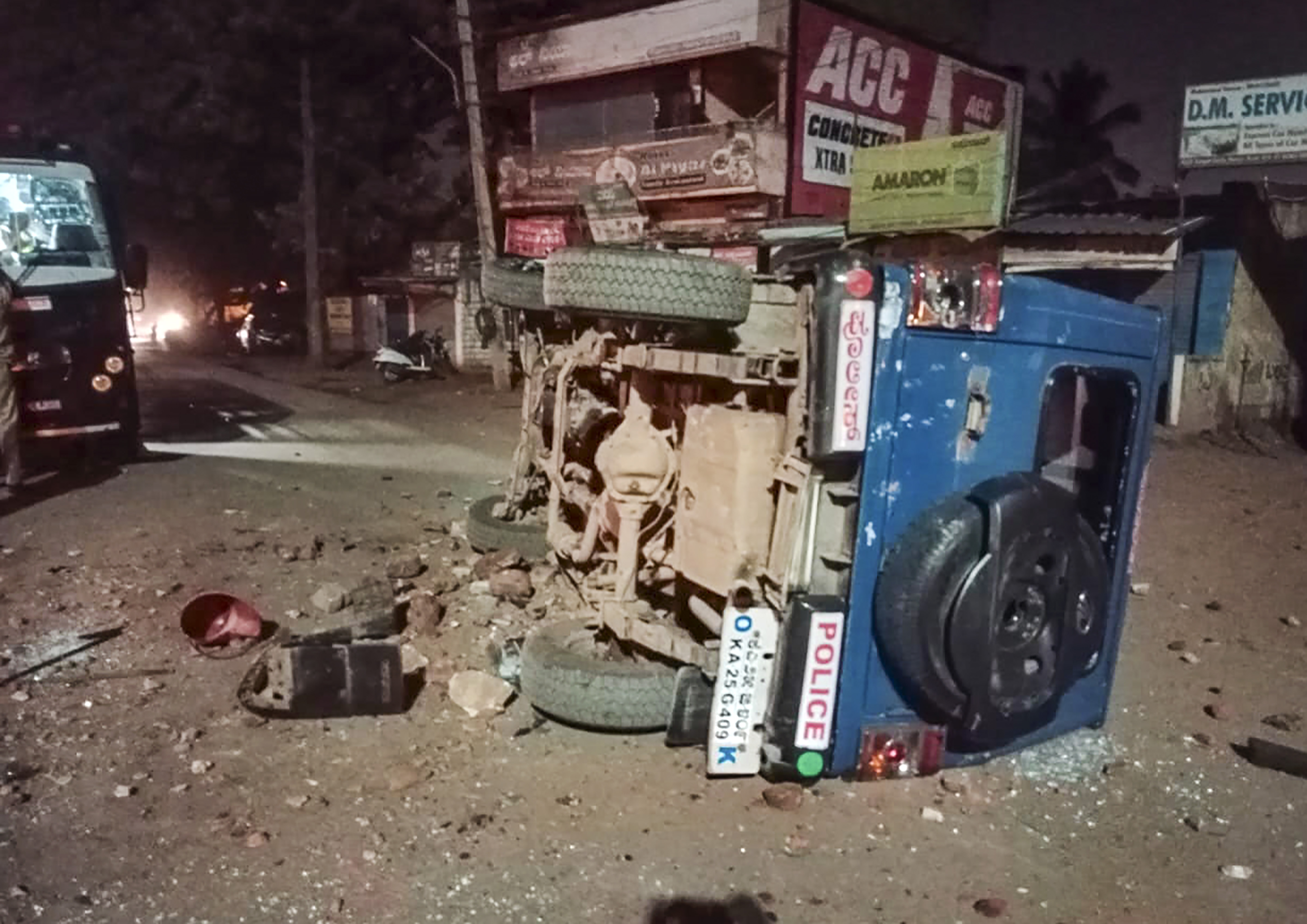 A damaged police vehicle after incidents of stone-pelting in some areas of Old Hubballi late on Saturday evening, in Hubballi district on April 17, 2022. — PTI

Incidents of communal flare-up during Hanuman Jayanti processions were reported from Andhra Pradesh and Uttarakhand while a mob went on a rampage, attacking police personnel, a hospital and a temple in the old town of Hubballi in Karnataka over a social media post on Sunday.

In the national capital, 20 people were arrested and two juveniles apprehended, while security was stepped up following clashes between two communities on Sunday when a Hanuman Jayanti procession was passing through Jahangirpuri. Eight cops and a civilian were injured in the violence.

Prohibitory orders under Section 144 have been clamped in Hubballi city in Karnataka after the violence that left 12 police personnel injured.

According to Hubballi-Dharwad Police Commissioner Labhu Ram, a police complaint had been lodged on an objectionable social media post after which a person was arrested.

In this incident, about a dozen police officers have sustained injuries, the police said, adding several police vehicles, a nearby hospital and a Hanuman temple were damaged.

Karnataka Chief Minister Basavaraj Bommai termed it an organised attack and said the state will not tolerate such incidents.

He also appealed to the people not to give a different political colour to this incident as it should be looked at from the law and order point of view.

“It was a pre-planned attack. The miscreants wanted to create Devara Jeevanahalli and Kadugondahalli like incident in Hubballi,” state Home Minister Araga Jnanendra said.

The minister was referring to the 2020 riot in Bengaluru where a mob set afire the residence of Congress MLA from Pulakeshi Nagar assembly constituency R Akhanda Srinivas Murthy and his sister over a social media post by his relative that was considered offensive by Muslims.

Denouncing Sunday’s incident, former chief minister H D Kumaraswamy said, “For the past few days, the communal cauldron is boiling. It hurts everyone. It should not continue. The Hubballi incident shows that we have not learnt any lessons from the past,” he said.

When the procession reached a mosque in the village, the Jayanti organisers switched off the mike, in reverence to the Ramzan observation. But some devotees allegedly chanted ‘Jai Shri Ram’ slogans, they said.

Irked by this, some people started pelting stones at the Hanuman Jayanti procession and the other side retaliated, police said.

Additional police force was deployed to prevent any untoward incident.

Though there was tension, the situation has returned to normal after the police intervened and pacified both sides, they said.

In Uttarakhand, stones were pelted at a Hanuman Jayanti procession while it was crossing through a village in Bhagwanpur area near Roorkee in Haridwar district on Saturday evening, leaving four persons injured.

Tension mounted in the area as people from adjoining villages gathered, but the timely intervention by police brought the situation under control, DIG Garhwal range K S Nagnyal said.

Nine persons were arrested and an FIR against 13 was lodged in connection with the incident.

Stones were hurled at the procession from rooftops when it was passing through Dada Jalalpur village. It triggered a stampede-like situation as people in the procession began to run for cover but the police were informed immediately and the situation was brought under control, Haridwar’s SP (rural) Pramendra Dobhal said.

He said police and Provincial Armed Constabulary personnel have been deployed in the affected area.

Since April 2, several incidents of communal clashes have been reported during Hindu religious processions, including on Ram Navami on April 10. Hindu and Muslim outfits have accused each other provoking the violence.

Top leaders of 13 opposition parties had on Saturday expressed deep concern over the recent incidents of hate speech and communal violence in the country, and urged people to maintain peace and harmony.

However, the BJP hit back and alleged the “ideology of appeasement” pursued over the last 70 years is responsible for the communal riots across the country.

Taking on opposition leaders over their joint statement, BJP spokesperson Sambit Patra said on Sunday this “selective politics” of opposition is harmful to the country.

Khargone city in Madhya Pradesh had witnessed communal clashes on Ram Navami last Sunday when stones were hurled, vehicles torched and some houses damaged, leading to the clamping of curfew in the entire city. Superintendent of Police Siddharth Choudhary had received a bullet injury.

With the situation returning to normalcy, the administration relaxed the curfew for four hours on Sunday morning.

So far, 44 cases have been registered in connection with the violence and 148 people have been taken into custody, in-charge Superintendent of Police (SP) Rohit Kashwani said. PTI