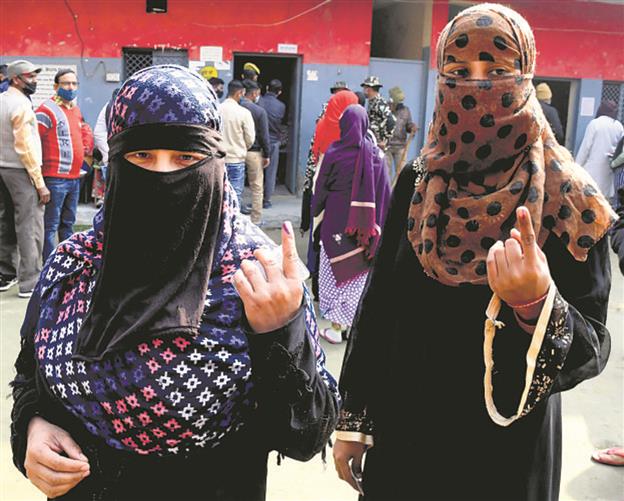 Women show their inked fingers after casting their vote at a polling station in Ghaziabad on Thursday. Manas Ranjan Bhui

Prime Minister Narendra Modi today reached out to Muslim women accusing the Opposition of “misleading” them and finding new ways to “block their rights”. The move came amid the hijab row in Karnataka which hogged the limelight world over.

Vote wisely lest up turns into Kashmir

If you (voters) miss this time, the five-year effort will be washed away. And it will take no time for UP to become Kashmir, Kerala or West Bengal. — Yogi Adityanath, UP Chief Minister

India beautiful in all its colours

From Kashmir to Kerala, Gujarat to West Bengal, India is beautiful in all its colours. Don’t insult the spirit of India. — Rahul Gandhi, Congress Leader

PM Slams Oppn for ‘misleading’ them

Addressing his first physical rally in Saharanpur as Uttar Pradesh polled for the phase-I polling, PM Modi said, “Our government stands by har majloom (every victim). Those people (Opposition leaders) are trying to trick Muslim sisters to push them back in their lives.”

Claiming that the BJP government “freed” Muslim women from the “menace” of triple talaq, he said, “Muslim sisters and daughters understand our intentions. We gave them protection from triple talaq. Now when the BJP received their support, some people got restless.”

The PM said, “It is necessary to keep the state riot-free, make women safe and send criminals to jail. A BJP-led government is essential to ensure that.”

Slamming “dynastic politics”, PM Modi alleged had they been in power during the pandemic, “vaccines wouldn’t have reached you”. Praising Yogi Adityanath, he said only the BJP government could ensure that the poor continued to get benefits.