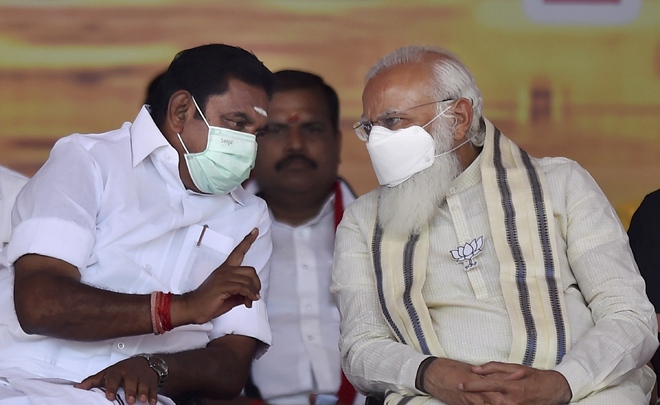 Prime Minister Narendra Modi on Friday called the Congress ‘high-handed’, saying it lacked an understanding of local sensibilities and asserted that his government did not see people's caste or faith before serving them.

In Tamil Nadu, the situation was such that senior DMK leaders who worked shoulder to shoulder with late party patriarch 'Kalaignar' (M Karunanidhi) were feeling suffocated due to 'the newly minted crown prince' of the party (DMK youth wing secretary Udhayanidhi Stalin), he said, addressing a poll meeting here, adding that 'politics did not work this way'.

“The Congress invoked Article 356 several times and both DMK and AIADMK governments in Tamil Nadu have been dismissed by that party in the past," he said. In Kerala, the PM attacked the Left government for its action against Ayyappa devotees during Sabarimala protests, saying they tried to “destabilise” sacred places and that devotees were not criminals. The Ayyappa devotees, who should have been welcomed with flowers, were lathi-charged, Modi said bringing up the Sabarimala women entry issue at an election rally at Konni in Pathnamthitta district, near the famous Lord Ayyappa shrine. The state had witnessed violent protests after the LDF government decided to implement the 2018 SC verdict allowing women of all ages to offer prayers at the shrine. — PTI