Modi is and will be NDA’s PM candidate, clarifies ally JD(U) 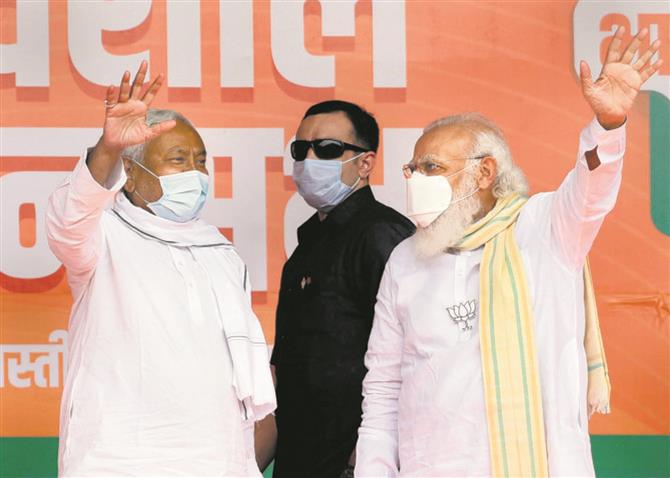 A day after he created a political flutter with his comment that Nitish Kumar had all qualities of a PM, JD(U) general secretary KC Tyagi today said Prime Minister Narendra Modi was the leader of the BJP-led NDA and will be face of the coalition for the 2024 General Elections as well. “Narendra Modiji is and will be the PM candidate for the 2024 General Elections,” Tyagi was quoted as saying.

New Delhi: Tanmoy Ghosh, BJP MLA from Bishnupur, on Monday joined West Bengal’s ruling Trinamool Congress (TMC) in the presence of Education Minister Bratya Basu. Ghosh said the BJP was into vindictive politics. “They are trying to take away rights of the people.” TNS

Tyagi yesterday said, “(Bihar Chief Minister) Nitish Kumar is not a candidate for the post of the Prime Minister but certainly PM material.” “The JD-U is the most trusted member of the NDA and PM Modi is the leader of the alliance. But he (Nitish Kumar) certainly is PM material,” he said. Apparently, the JD(U) also passed a resolution in its national council meeting that stated “Nitish Kumar has all qualities that a PM should have”.

The JD(U), which has a knack for putting the BJP in a spot every now and then, recently backed the demand for an inquiry in the Pegasus spyware issue and a caste census along with the lead opposition in Bihar, the RJD.

Aiming for a national party status, the party is now looking to expand base by contesting states like Manipur and Uttar Pradesh next year.

Sources say BJP’s Bihar ally is aiming to contest “50 seats in the NDA coalition” in the 2022 elections to the 403-member UP Assembly and that it may contest 200 seats on its own, if the seat sharing formula with the BJP does not work out. Notably, the ruling BJP is expected to contest the high-stake UP elections, with existing allies like the Apna Dal and the Nishad Party having a specific caste base.

The BJP and JD(U) are partners in governments in Bihar and the Centre.