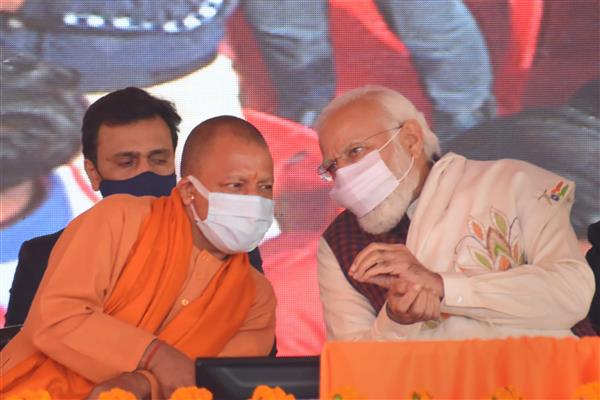 Prime Minister Narendra Modi on Saturday used a new coinage UPYOGI or ‘UP plus Yogi bahut hai upyogi’ to praise Uttar Pradesh Chief Minister Adityanath for “eliminating” mafias and undertaking a lot of developmental work in the state.

Modi said poor law and order triggered exodus of people from Uttar Pradesh earlier, but during the past four and half years bulldozers have razed unauthorised properties of mafias, causing pain to those patronising them.

The prime minister was addressing a rally after laying the foundation stone of 594-km-long Ganga Expressway in this Uttar Pradesh district.

The BJP has already declared that Adityanath will be its face in the upcoming polls in the political heartland of the country.

“You are well versed with the situation here and the law-and-order situation in western Uttar Pradesh before the Yogi Adityanath government came. In the earlier days, as the sun set, people flashing ‘katta’ (country-made pistols) used to come on the streets to make the lives of people hell,” Modi said, adding the “culture of katta” has ended now under the Adityanath government.

“These people have problems with cleaning of river Ganga. These are the people who raise questions on the action of the Army on terrorists. These are the people who bring the made-in-India coronavirus vaccine under the scanner. They have a problem with the grand dhaam of Baba Vishvanath in Kashi, and these people have a problem with the grand temple of Lord Ram in Ayodhya,” Modi said, hitting out at his rivals.

Emphasising on the benefits of a double engine government, he said, “If you remember the condition of the state five years ago, barring a few areas of the state, electricity could not be found in other cities and villages. The double engine government not only gave 80 lakh free power connections, but every district is getting more electricity than before.”          He said more than 30 lakh poor people got pucca houses in Uttar Pradesh and this campaign will continue to cover all the remaining entitled beneficiaries.

Built at a cost of Rs 36,230 crore, the six-lane Ganga Expressway will give a fillip to multiple sectors including industrial development, trade, agriculture, tourism etc. It will provide a big boost to the socio-economic development of the region.

The prime minister also said that the priority of the government is to strengthen those who are lagging behind in the society or are backward, and make the benefits of development reach them.

“This feeling is also visible in our agriculture policy and the policy related to the farmers,” he said.

Modi said that in terms of giving MSP (laabhkaari mulya) of sugarcane, Uttar Pradesh is one of the leading (‘agrani’) states, and it is also ahead when it comes to making payments (to the farmers).

“Today, when all of Uttar Pradesh moves ahead together, the country also moves ahead. Hence, the focus of the double engine government is on the development of UP.

“With the mantra of ‘sabka saath’, ‘sabka vikaas’, ‘sabka vishvaas’ and ‘sabka prayaas’, we are making honest efforts for development,” he said.

Samajwadi Party chief Akhilesh Yadav took a dig at the coinage and at the chief minister, whom he called “unupyogi” (useless) and cited instances of crimes against Dalits and women under his rule.

He made the remark in a tweet, punning on the Hindi word “Up-Yogi” (useful) as Prime Minister Narendra Modi called him earlier in the day.

n his tweet Akhilesh said, “The daughter of Hathras, the farmers of Lakhimpur, the trader of Gorakhpur, women who are feeling insecure, unemployed youths, the Dalits, and the backward class (people) are saying for UP, the current government is not useful, it is useless”.

“UP is today saying that it does not want the BJP,” he added.

Akhilesh headed Samajwadi Party government in the state from 2012-17 and was succeeded by Adityanath.

The war of words between BJP and SP continued ahead of crucial assembly elections scheduled early next year in the state.  — PTI