Hills and plains of northwest, including Rajasthan, to experience some more rains during next couple of days; a delayed withdrawal may also mean delayed onset of winter; official date of retreat from West Rajasthan is September 17 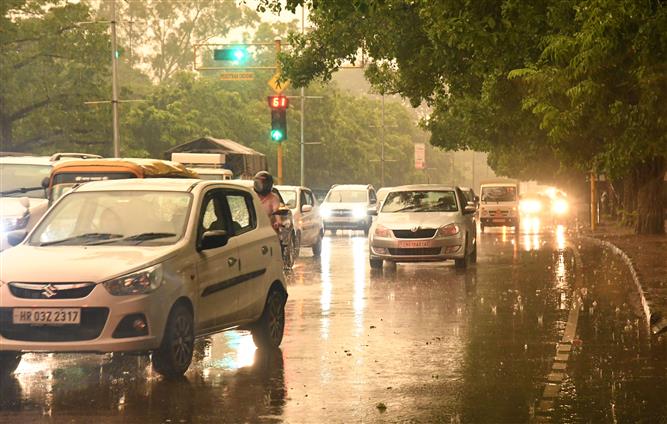 Cars trudge through a heavy rain in Chandigarh on September 16, 2021. Tribune file photo

The withdrawal of monsoon appears to have been again delayed this year with Indian Meteorological Department on Tuesday predicting more rains over hills and plains of the northwest, including Rajasthan, over the next couple of days.

According to private forecaster Skymet, the retreat of the seasonal rains can now be expected in the first week of October. Mahesh Palawat of the Skymet says the trend of late monsoon retreat being observed from the past couple of years is continuing this year as well

Notably, last year, the withdrawal date was extended to September 17.

The prolonged active spell has certainly helped to reduce the rain deficit to around 4 per cent, say experts, adding that the formation of convective systems over the Bay of Bengal and their movement over central and northwestern parts are among the reasons for its extended stay.

Currently, the Monsoon trough is lying south of its normal position and is likely to remain there during next five days, says the IMD, adding that fairly widespread to widespread rainfall with isolated very heavy falls are likely over Gangetic West Bengal and Odisha on Tuesday along with isolated heavy on Wednesday.

So far as the west is concerned, fairly widespread to widespread rainfall with isolated heavy falls are likely over East Rajasthan and Gujarat region till September 25 and over West Rajasthan on Tuesday and Wednesday.

Meanwhile, scattered to fairly widespread rainfall with isolated heavy falls are also likely over Uttarakhand till September 25 and over Himachal Pradesh, Punjab, and Haryana on Tuesday and Wednesday.

Last year, the IMD had revised the date for the withdrawal of monsoon from the northwest by nearly a fortnight in mind the trend (of delayed retreat) being observed over the past couple of years.

The southwest monsoon starts withdrawing from west Rajasthan first.  Years 2017, 2018, 2019, and 2020 all saw a delayed retreat. Officially, the four-month season begins on June 1 and ends on September 30.