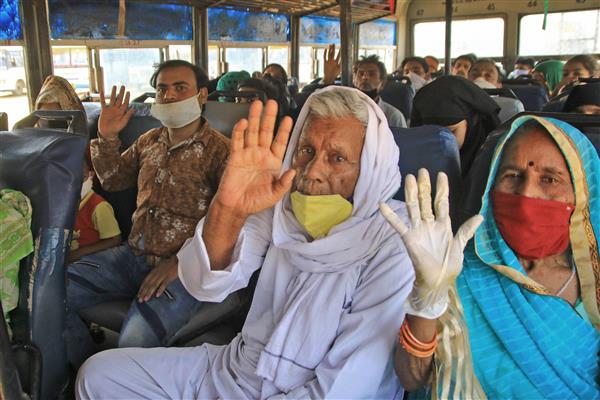 Migrants board a bus arranged by Rajasthan government from a shelter home at Kanota village to reach their native places, during the ongoing COVID-19 lockdown, in Jaipur, on Saturday, May 23, 2020. PTI

A month-old baby girl was among seven patients who died of Covid-19 raising the toll to 160 in Rajasthan on Saturday.

The four-week-old baby girl of Ladnu town in Nagaur district succumbed to the virus at SMS hospital. She had co-morbidity with paralytic Ileus (intestine-related illness), a state medical bulletin said.

This is the third baby death due to virus in April and May in the state.

The total case count in the state has spiked to 6,742 with 248 fresh confirmed cases on Saturday.

Nagaur reported one more death, while Kota and Jaipur reported two each and Chittorgarh one.

Jaipur has recorded a maximum 82 casualties followed by Jodhpur 17, Kota 16, Nagaur 7,  Ajmer and Pali 5 each, Bharatpur and Sikar 4 each, three in Bikaner,  two each in Alwar, Karauli, Chittorgarh, Jalore and Bhilwara and one each in Churu,  Banswara, Udaipur, Pratapgarh, Sawaimadhopur and Tonk.