Naseeruddin Shah on Bollywood’s Khans: I can speak because I don’t have much to lose 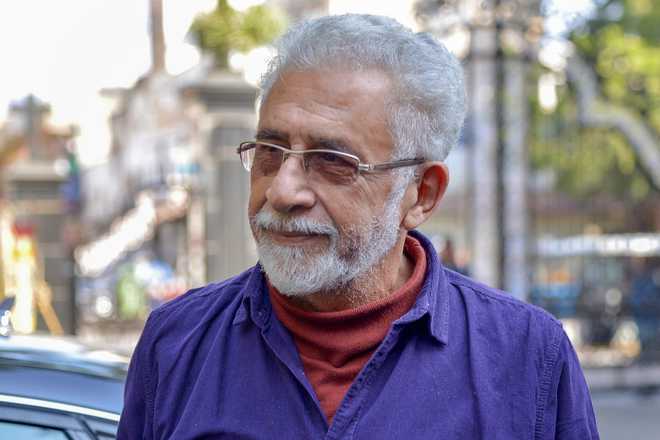 Known for speaking his mind, actor Naseeruddin Shah says he understands why the Khans of Bollywood don’t voice their opinion but he supposes he can because he doesn’t have that much to lose.

The “Ankur” and “Jaane Bhi Do Yaaron” star added that he wished the Khans, who have been at the top for 20-30 years, had “more confidence” in their own abilities.

“How much will they lose? They will lose an endorsement or two. It’s not that… it’s the harassment they will be subjected to. They find it difficult to take. And the fact that Aamir (Khan) and Shah Rukh (Khan) withdrew completely into a shell after making one harmless statement respectively illustrates this. I suppose I can speak because I don’t have much to lose,” Shah told India Today in an interview aired on Tuesday night.

The actor said the film industry has the power to stay independent and wished they had enough courage to do so.

“But they are giving in because their interests are too large and too varied and they have too much to lose and they’re easy targets.”

Shah, known for his forthrightness, also warned against “rising right wing fanaticism”. He clarified that his comments about a section of Indian Muslims celebrating the rise of the Taliban were misconstrued by the community.

“Maybe I made a mistake by not speaking clearly enough and clarifying that I didn’t mean the entire Muslim community, which is how it is being interpreted by interested parties... The Muslims have taken offense to it. The Hindus are celebrating it. Neither of this was my intention.” the actor told India Today.

Shah, whose video earlier this month articulating his views on the Taliban and Indian Muslims was circulated widely, has been giving a series of interviews in the last few days to clarify his comments and also voice his concerns on fundamentalism in the world and in India.

Considered to be a pillar of the quality cinema movement in the industry and among India’s most talented actors, he said in another interview that he is worried about hate messages and statements advocating violence against the Muslim community but does not believe India is heading towards Talibanisation.

The actor said he was surprised to be embraced by the right-wing for his statement which was misunderstood by the Muslim community.

“... I do not believe that we are heading towards Talibanisation but what’s happening is pretty much worrying where you openly have statements and lectures advocating violence against the Muslim community when you have hate messages being passed on the internet and on social media.

“But despite all that, I’m still not pessimistic about the future and I don’t believe that we will end up going the way of the Taliban,” he told Barkha Dutt’s Mojo Story.

The veteran actor was scathing about Uttar Pradesh Chief Minister Yogi Adityanath’s ‘abba jaan’ comment at a public speech earlier this week—that rations meant for the poor were gobbled up by those who say “abba jaan” before his government came to power.

Not all Muslims call their fathers ‘abba jaan’, he responded as the remark emerged centre of a polarising debate.

“I didn’t call my father abba jaan. I called him baba, and so did my Hindu wife, who called her father baba. So this person is what he is, there’s no point even reacting to him. But the fact is his ‘abba jaan statement’ is a continuation of the hate statements he has been spewing all along,” he said in his India Today interview.

“When we have absurd statements like love jihad and now ‘narcotics jihad’ being made by a priest... I don’t know under whose influence he said things like that. But this is meant to alienate... or the ‘abba jaan’ statement made by the chief minister of UP recently which is beneath contempt, which is not even worth reacting to.”

Asked what he had to say to Hindus who patted him on the back for warning the Muslim community against the Taliban, Shah said more Hindus should speak against rising right-wing fanaticism in India.

“Some moderate Hindus, this time, have spoken against it because it’s really going a little too far.”

Except for the occasional hate message on Facebook, by the fake accounts, Shah said he has not been a target but he worries about the future of his children. If they are confronted by a mob, they won’t have an answer about which religion they belong to as they had no such teachings, he added. —PTI